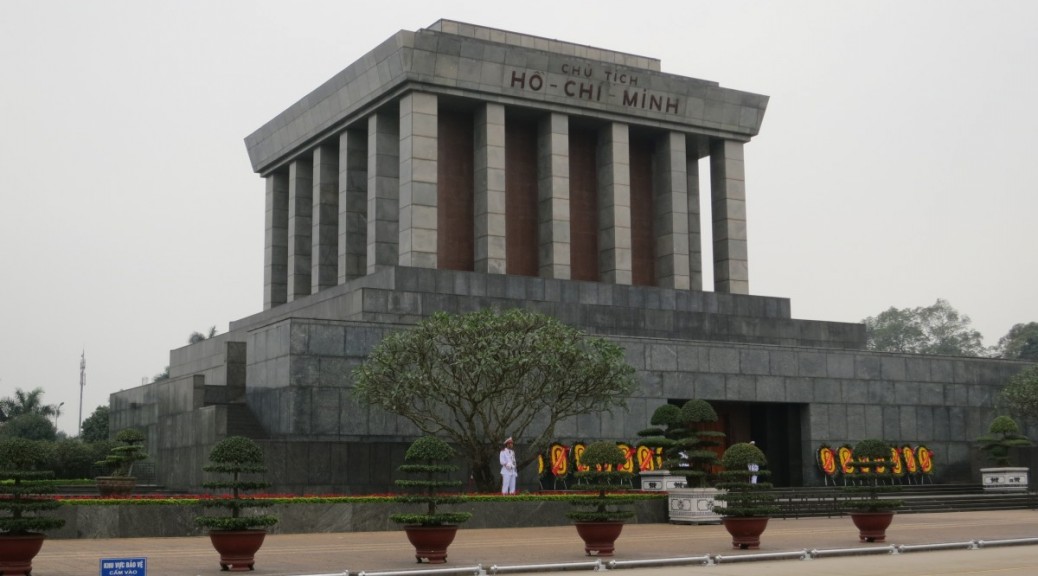 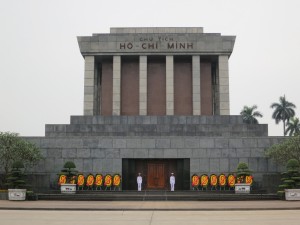 The front of the mausoleum. Notice the symmetry.

It was nearly a week in Ha Noi before we got to visit the mausoleum of Ho Chi Minh. It’s only open a few days a week, and even then, only for a few hours. We went on Saturday, April 5th in the morning around 9am (it was open from 8-11am).

The grounds are spectacular, with very wide open spaces, lots of green grass, trees, and symbols of state power.  The facility is setup to receive thousands, with very strict rules when you actually walk inside to see the body of Ho Chi Minh. No talking, arms at your side, not in your pockets, hats off, and no photos. All very respectful. 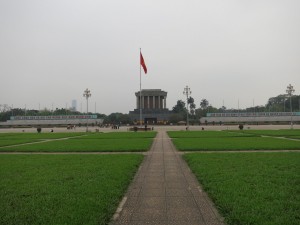 Ho Chi Minh mausoleum from a distance. The translation of the writing on each side is: “Long live the Socialist-Republic of Vietnam. The Great President Ho Chi Minh will live forever in our work.”

I read somewhere that the design of the mausoleum is based on Lenin’s in Moscow.  When we got in line to see his body in a rather extravagant glass case, there were hundreds of visitors, many of whom were clearly veterans, and many foreigners. All cameras and large bags had to be checked.

We walked single file into the building and passed a dozen or so soldiers dressed in white, many carrying side arms, some rifles. As we climbed the stairs it was nearly silent except for the obnoxious English ladies in front of us that couldn’t shut their pie holes, that is, until a soldier politely told them to shut the fuck up. 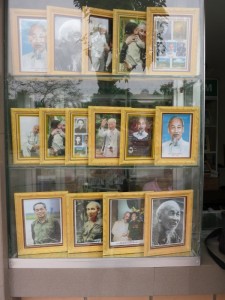 Ho Chi Minh. Framed portraits for sale near the mausoleum.

As someone critical of centralized systems of state power, and especially the corruption that usually accompanies a one-party state, not to mention the cult of personality that can border on religious fanaticism (Kim Jong iI), I found myself a little conflicted visiting the mausoleum.

On the one hand, I had to admire and respect his tenacity in the struggle to free his country from foreign invasion. On the other, I was suspect of the extravagance of the whole affair. Ho Chi Minh’s legacy, and the legacy of unification are essential historical narratives that legitimize the rule by the communist party (CPV), which as I quoted in an earlier post, deserves that legitimacy.

The facts on the ground are pretty clear: it took the organization that Ho Chi Minh created to defeat one of the most powerful empires in world history in a military confrontation, at a cost that is almost beyond human comprehension. How effective would a decentralized, anti-authoritarian movement have been in the same situation? I wonder. At best I can say that different struggles require different tactics. A friend once said, “you don’t fight power with the resistance you want, you fight power with the resistance you have.”

Besides some of the corruption I mentioned in my previous post, I don’t feel that it’s my place, as an American, to judge how the Vietnamese choose to govern themselves, especially after what they have suffered at the hands of the US government. Ideological principles are useful guiding posts in the struggle for liberation, but the messy business of surviving in the presence of a sociopathic empire hell bent on ruling the world is quite another matter entirely.

Nevertheless, it is a surreal experience seeing a preserved body in a glass case, especially someone like Ho Chi Minh. This was the dude! The guy who is on every single piece of currency in the country, the hero of unification, and the leader that defeated the French and the Americans.

But. I’ll be honest.

I kept asking myself if that was really him and not a wax figure. We were told that Ho Chi Minh had requested he be cremated and have his ashes spread throughout the country. Request denied.

Regardless, umm, he looked good. It was a powerful moment. For some reason I was paying attention to his beard, nearly as full as you might expect, and grey. He was dressed in white as I recall, in traditional peasant garments.

Up on the wall behind Ho were two giant symbols, side by side at about 3ft x 3ft, carved in concrete (or dark marble), one a star, and the other a sickle and hammer, the symbol of the communist party. When you combine the silence, the disciplined soldiers in uniform, and the body of a man worshipped by its people, those symbols have power. Never underestimate the power of symbols in any context, especially when they are omnipresent. Corporate logos immediately come to mind, and for some odd reason in my case, band logos like Crass.

Within about 20-30 seconds, we were in and out of the chamber, heading down the stairs and out of the mausoleum. That was a mighty quick moment. A thousand questions and thoughts probably raced through my head. How the fuck did you survive all those years of destruction? If only your letters to the Americans in 1946, asking for support, were heard. I’m sorry for what my fucked up government did to your country. Solidarity!

Outside, we realized how fast that just happened, so we breezily walked around the grounds checking out the other things, like Ho’s old home, his cars, and a house on stilts. 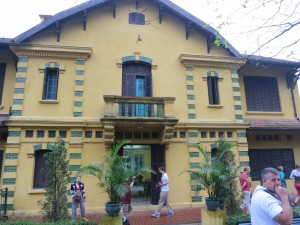 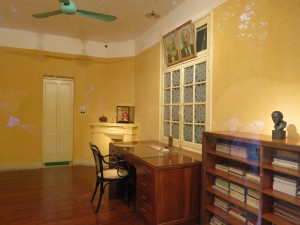 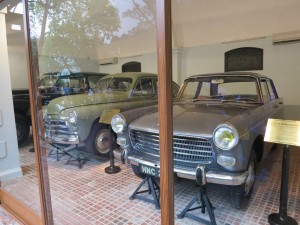 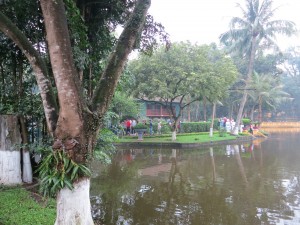 View of one of Ho Chi Minh’s houses. This one was referred to as the house on stilts.

That pretty much did it for our visit to the mausoleum. The grounds around the area are well kept, and there is a nice spot to get coffee or tea, which we did. The week before we spent some time at the Ho Chi Minh Museum. Below are some pics: 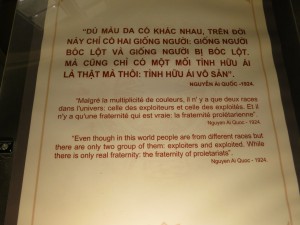 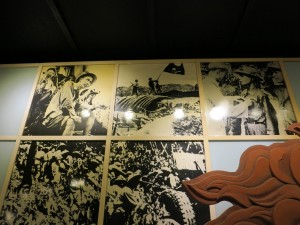 Ho Chi Minh Museum. The center image is the famous image of victory over the French at Dien Bien Phu. 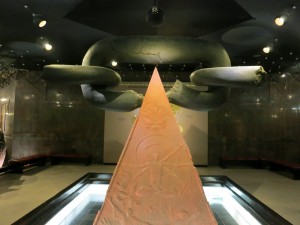 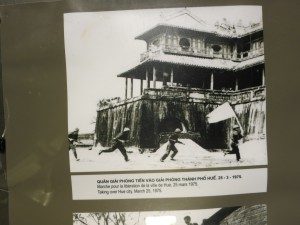 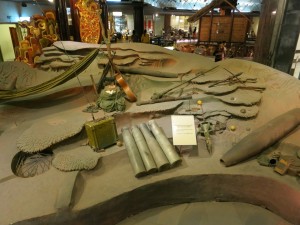 Inside the Ho Chi Minh museum. Artifacts from the war. Notice the pointy bomb next to the display sign. It was dropped by the US into the jungle, landed in the ground vertically. The top portion acted as a transmitter and would signal US forces when it picked up voices. The US would then know where to drop its bombs. Skilled Vietnamese soldiers didn’t talk loudly. 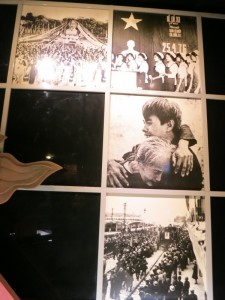 Images of victory. From Ho Chi Minh Museum. The middle image is famous, a symbol of north-south unification with a mother who was in the south finally seeing her son again, who was in the north. 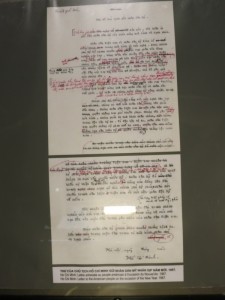 Caption reads: “Ho Chi Minh Letter to the American people on the occasion of the New Year 1967″ 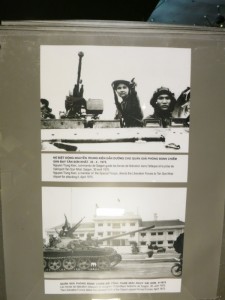 Images of being close to victory over the U.S. in 1975. Bottom of the captions are in english. 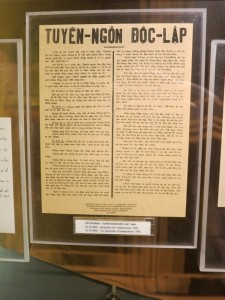 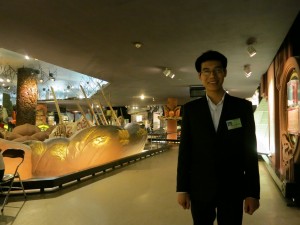 Quyen (Quinn), our guide through the Ho Chi Minh Museum.