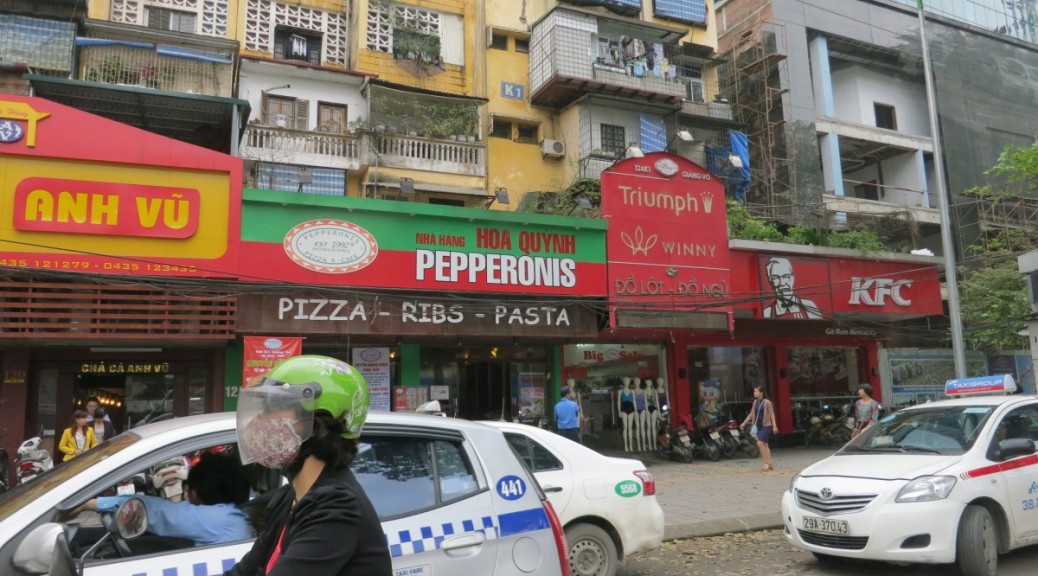 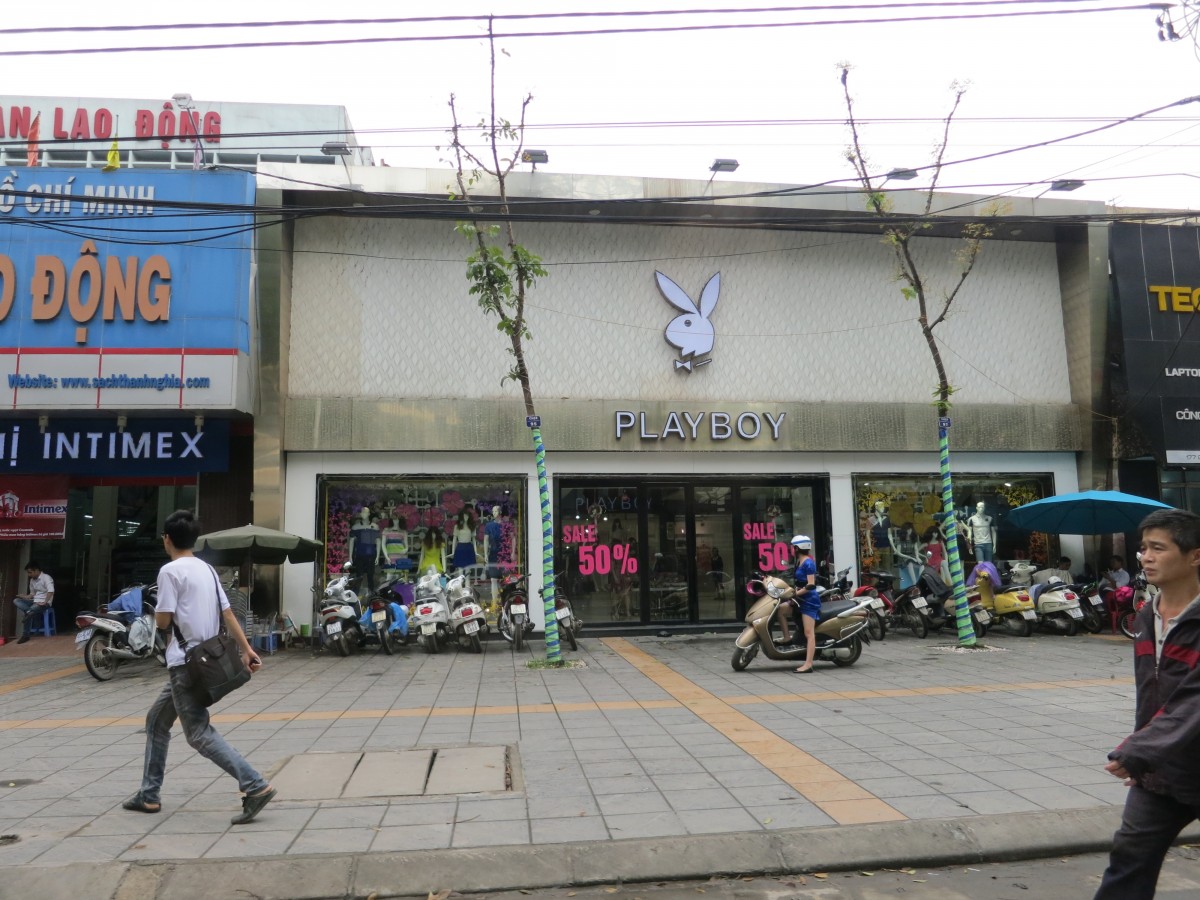 Playboy in Hanoi. Very likely a knock-off store. Dunno, we didn’t go in.

The Socialist Republic of Vietnam is a one party system run by the Communist Party of Vietnam, or CPV. When one thinks of a one-party state, it’s easy to think about North Korea or the old Soviet Union. Vietnam is certainly neither. With the massive amounts of foreign capital flowing into the country, visible everywhere, my first thought was to China, which has been welcoming western capital for over 30 years.

In trying to understand the current day politics, I was searching for articles analyzing the political system in Vietnam. I came across one by Hai Hong Nguyen, who writes:

The Vietnamese population seems to be strongly supportive of CPV rule. This is especially thanks to the responsiveness of the state to society’s demands, and the country’s social stability. Frequent farmer protests challenge this argument, but these protests are aimed at local government, not the central government, and there has never been a mass protest against the CPV’s rule. The role of the CPV in national independence and unification, as well as high economic growth during early Doi Moi, should be recognised, but criticisms have been levelled at the CPV for recent economic lows and rampant corruption.

The combination of state capitalist ownership over public resources, an influx of foreign capital, and no checks and balances within the hierarchy of the CPV, has led to the corruption, for which there have been recent attempts to correct.

However, lest we forget dear western reader, it must be pointed out that corruption and nepotism is no stranger to the US political system, where accountability seems to be a thing of the past, even when politicians engage in war crimes, torture, and violate international law with a flick of the wrist.

The US constitution seems to be irrelevant too, with the presence of the NDAA, NSA Stasi-like-spying, kettled protests, due-process free drone strikes that target US citizens (plus weddings and funerals), the PATRIOT Act and a scourge of excessive police violence.

One of the biggest threats to US leaders and capitalist hegemony over the globe is the threat of a good example. Any country in the past that tried to be independent of the Washington-Consensus (i.e. a market economy dominated by the West) was a target for invasion, subversion, or a coup, initially by economic means, but if that failed or was not an option, military means. John Perkins documents this very well in his book, Confessions of an Economic Hitman. And this dynamic is currently being played out in the Ukraine and possibly driving the world toward war.

Partly in relation to Ho Chi Minh’s popularity in Vietnam during the 1950s, and after the liberation from the French in 1954, Vietnam became a cold war target of the US.

So today, when talking about internal problems in Vietnam, I think it has to be juxtaposed to their struggle for national liberation in the past. It is remarkable to me that Vietnam has come so far, after what it has had to endure. They’ve had to fight against the invasion of not only the US, but of the French and Chinese too.

But I fear for what all this invested capital may mean for Vietnam. Whatever short term gain may be realized, the long term impacts could be devastating. One example is the mining of bauxite. The logic of capitalism, and its externalization of costs, or externalities (the shit they don’t pay for, but we pay for in the form of pollution, environmental degradation, ecocide, loss of finite resources, loss of the commons, the suffering of low paid workers, etc), is a dangerous game to be playing with well-financed, predatory western capitalists. 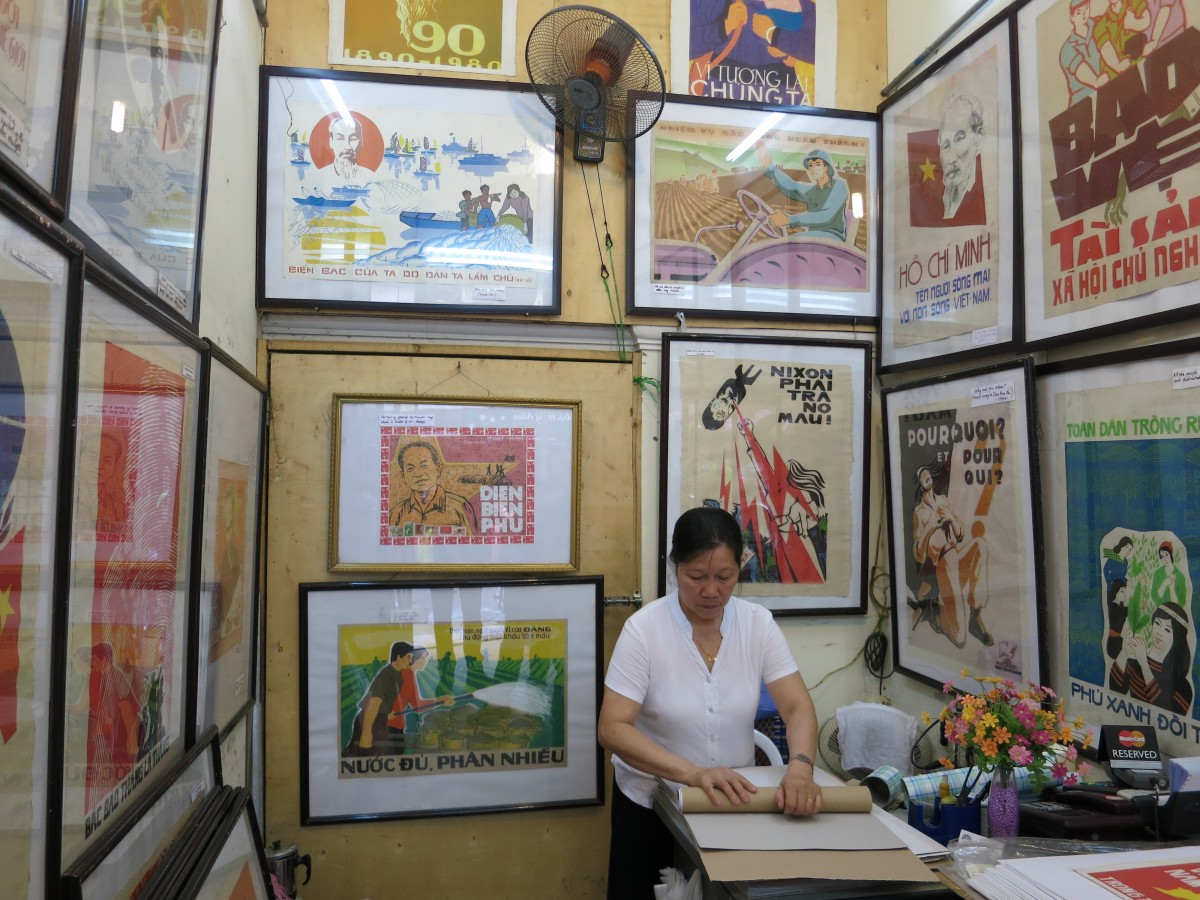 When we got out of the airport in Hanoi, and started driving towards the center of the city (about 45min), I was struck by the number of billboards advertising various banks and the massive industrial warehouse facilities visible from the highway, listing their corporate owners: Yamaha, Toyota, Canon, foreign construction companies, among others. McDonalds and Starbucks just opened recently in Ho Chi Minh City.

The most dramatic scene I think I witnessed in regards to the contradiction between the dream of socialism and the desire for economic growth was the glitzy Louis Vuitton store located directly across the street from a massive image of Ho Chi Minh hugging a child.

Are armed national liberation movements a thing of the past as a result of the ubiquitous nature of a global capitalist integration? If they aren’t, they might become irrelevant if the ecosystem crashes as a result of capitalist consumption, something that is looking more probable everyday now. It’s clear the current hegemon isn’t changing course anytime soon.

What about earth liberation from capitalism? It’s not hyperbole to say that the choice may be between profit and death, or egalitarianism and life. Is another system possible? Well, there had better be, otherwise we are all likely doomed.

Thanks for reading this blog. We are headed home. We love Vietnam and it’s people.