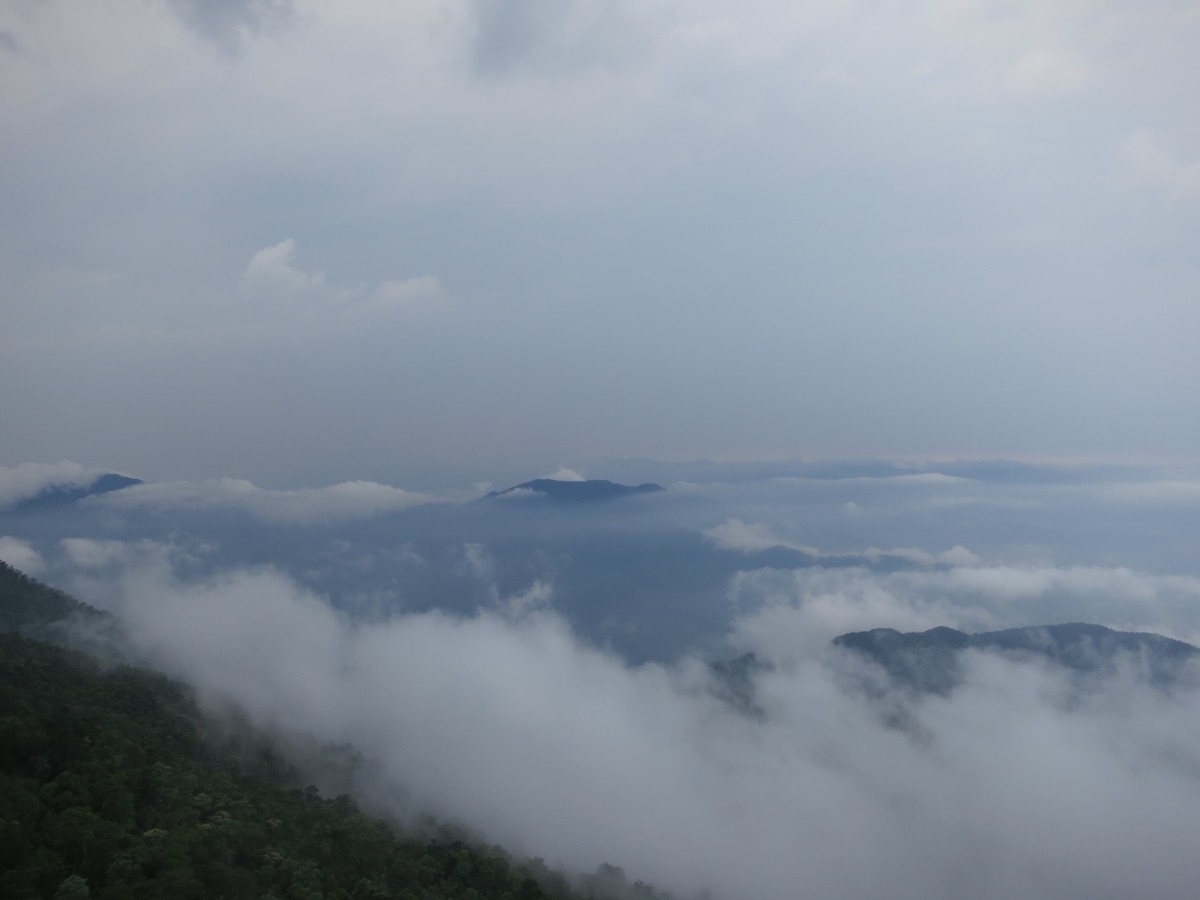 We arrived in Danang (da-nong) on Sunday afternoon, April 6, 2014, flying on Vietnam Airlines from Hanoi. Da Nang is located in the middle of the country and is a huge tourist destination now, with primarily Chinese, Russian and Australian tourists. The highway running parallel to the beach is dotted with hotels, many still under construction.

25km (15 miles) south lies Hoi An (hoy-on), a tiny village-like town which is also the quintessential tourist destination. Both Danang and Hoi An reminded us a bit of Mexico, where cities on the beach attract the rich to luxury hotels, surrounded by the working poor. The infrastructure is very similar.

Danang is more of a “normal” city, with the largest population outside of Hanoi and Ho Chi Minh City. There are a number of scattered modern high rise buildings, local bars, and almost everything you would expect that goes along with a beach culture.

Danang used to host the US Air Force base during the war, which is still visible now. For some reason, they haven’t torn it all down completely. You can still see the remains of some hangars and the air traffic control tower.

I am told that for a time during the war, this was the busiest airport in the world with some 1500 flights a day, coming and going. Danang International Airport, located on the opposite side of town, is still massively polluted with dioxin from Agent Orange, currently under a massive cleanup effort. And who says that the U.S. is opposed to the use of chemical warfare? 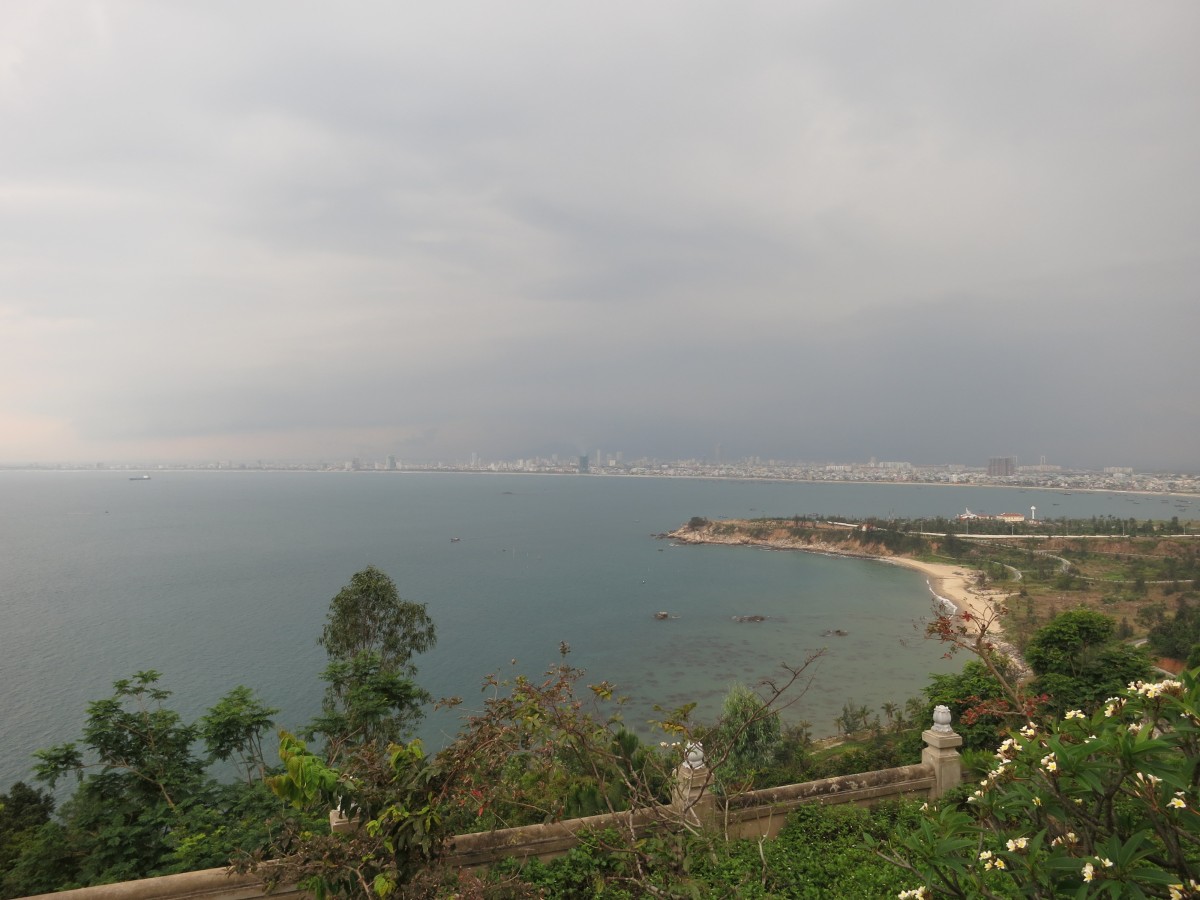 Coast of Da Nang as seen from the Bodhisattva of Mercy statue.

Danang has a beautiful beach, which the Americans used to call China Beach. It’s humid, hot, and the water is reasonably warm for April. Looking east while standing on the beach, you might actually think you were in Mexico, except that the view north and to the left presents a giant statue, not of Christ, but of the Bodhisattva of Mercy statue. It stands 67 meters tall, or 219 feet. 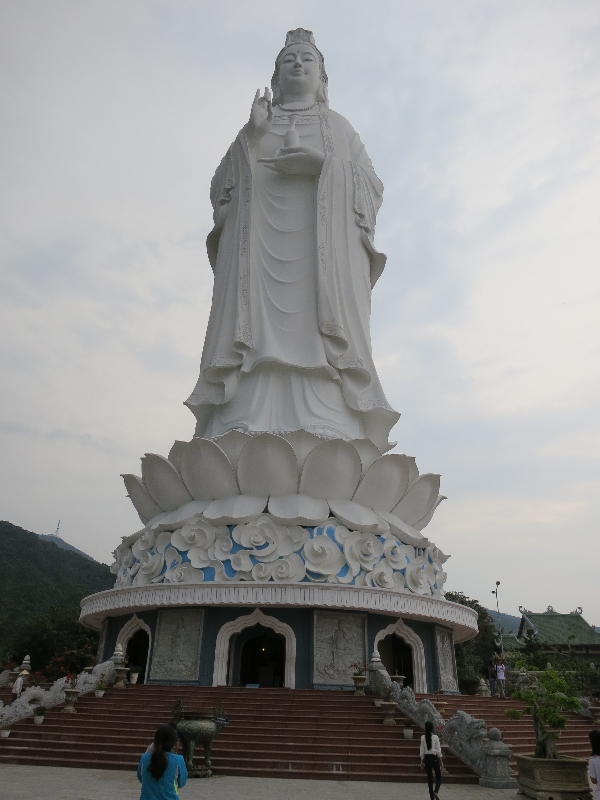 On the southern part of Danang are the 5 marble mountains, each one named after an element of the earth. We hiked the largest one which houses a number of Buddhist temples, and massive caves.

During the war, the vietnamese army hid a hospital clinic inside one of the caves. The names of the mountains are Hoa Son (fire mountain), Kim Son (mountain of metal), Tho are (mountain of Earth), Thuy Son (water mountain) and Moc Son (wood mountain). 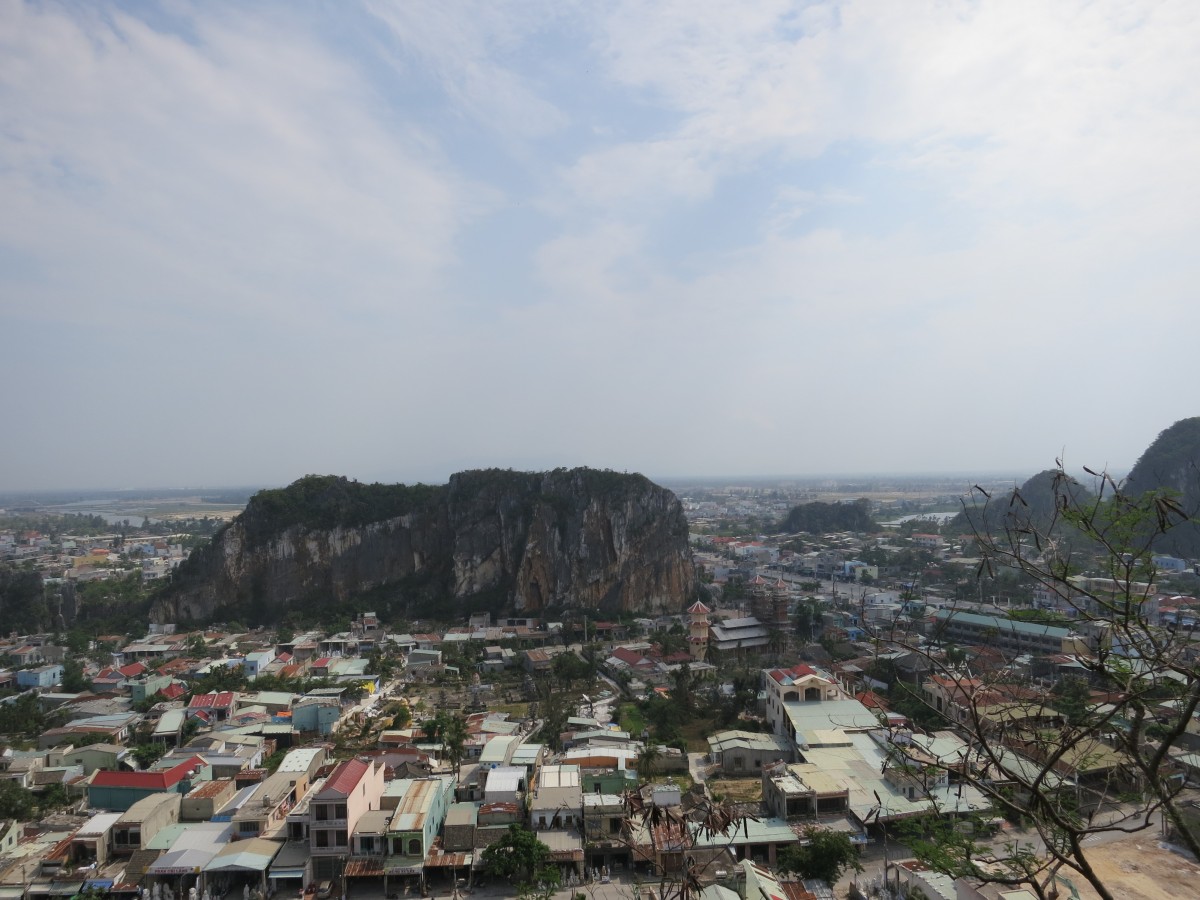 South view from on top of one of the marble mountains in Da Nang.

Along the beach sprout massive hotels and casinos, which have been appearing within the last 10 years, including one Chinese casino that was as massive as it was obnoxious. The Hyatt down the road was almost as big, but equally obnoxious. It’s clear that there has been a huge capital inflow into the country, and a kind of two tiered society is being created here, with the ultra rich living across the street from the ultra poor. Tourist money is flowing like water here, as was clear from our visit to Hoi An. 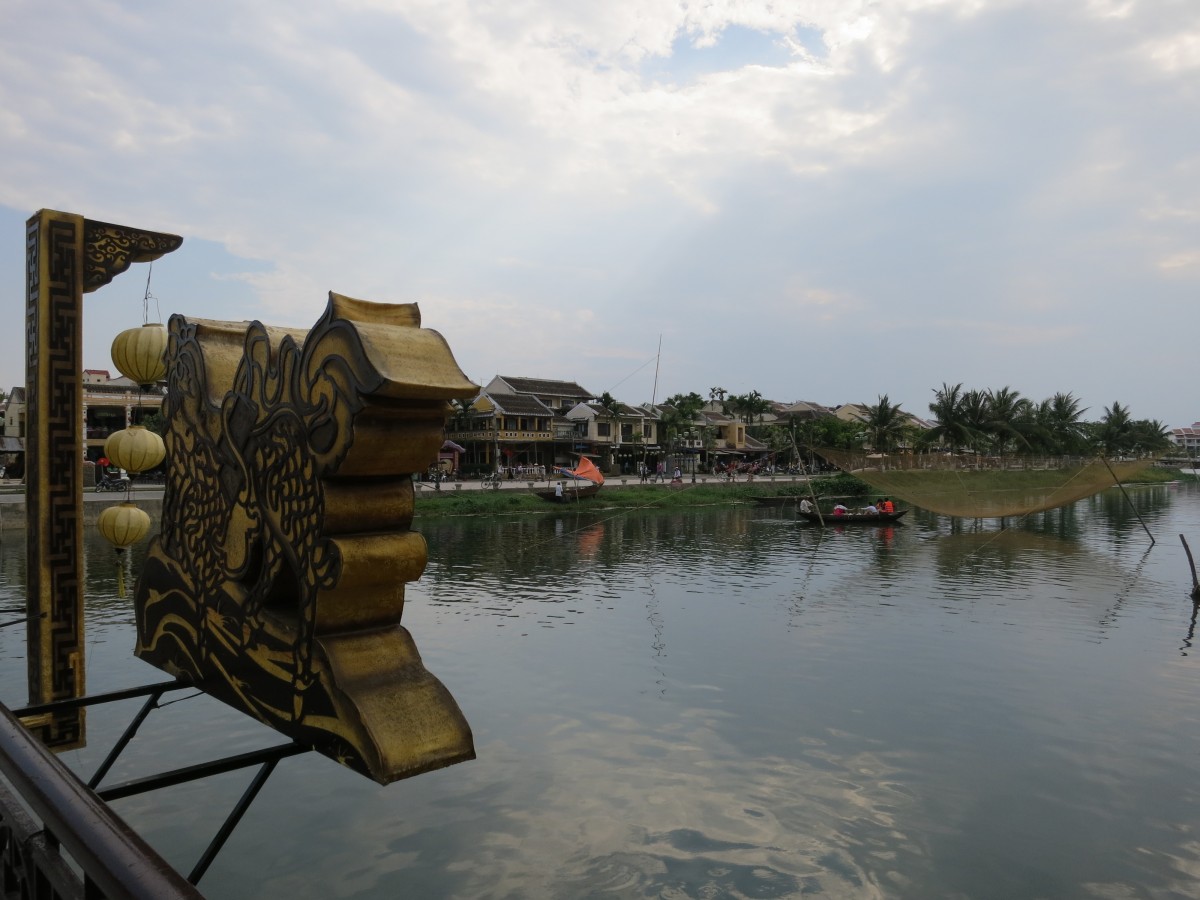 A view from a bridge in the middle of Hoi An

Hoi An is a beautiful town, but it’s kind of a shopping mall for tourists. But the beaches are supposed to be nice, although we didn’t check them out. We were far more interested in the people and the town of Hoi An. There were plenty of bars and restaurants to hangout in, and although still cheap, there was a noticeable price increase compared to Hanoi and Danang.

One thing we really appreciated was that the center of town was supposedly off limits to cars and motorcycles, but bicycles were ok. We got the feeling that locals pretty much ignored that restriction. We did ride bikes all over which I’d highly recommend.  We only stayed a day and a half, but it was enough. 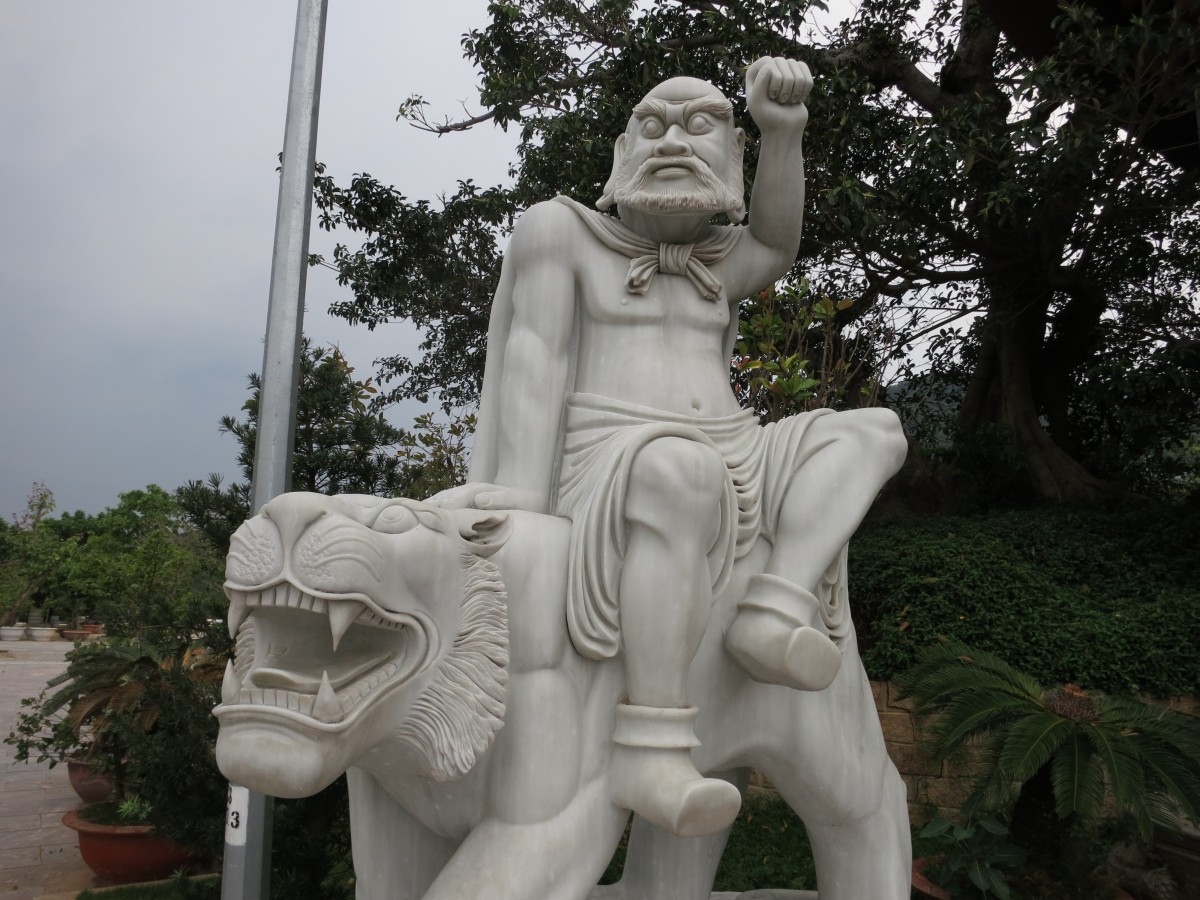 Marble statue at the Buddhist temple, located right behind the Bodhisattva of Mercy statue.

Mr. Duc (rhymes with cook) was our cab driver. He insisted that we call him if we need a lift anywhere, so we did, and he drove us to Hoi An, and the next day, back to the airport.

Duc had a lot to tell us about Danang and Viet Nam. His parents worked for the Americans at some point during the war, as I recall, prior to 1965. After 1975, and the end of the war, his father was imprisoned for a few years because of that work. It also meant that their entire family could never get a government job, ever. I don’t know exactly what his parents did for the Americans, but I don’t think it was military related, at least not directly.

Because Duc can’t get a government job, it means he is forced into the private sector. I’m not sure that he would even want a government job, but the irony of a socialist state pushing a citizen into the private sector for something his parents did wasn’t lost on me. I am not sure whether this was a result of CPV (Communist Party of Vietnam) policy, or cultural, or both.

But that is Viet Nam today, and the parallels with China seem clear: open up the country to western capital and tourism, and accept all that goes along with a globalized economic system. I am curious if the CPV policy explicitly sections off those areas allowed to engage in capitalist development, and those areas which will be strictly state controlled. I suspect that is the case.

For example, narrow capital investment would be allowed for hotels and small businesses, those areas which drive tourism, but the state would maintain ownership over natural resources and insist on joint ownership for investments over X amount of dollars, or dong. There were many signs hanging on construction projects that referenced a joint venture between Vietnam and some foreign company.

When you are in Hanoi, there are hundreds of government buildings, all painted yellow, with hundreds of flags flying everywhere. It’s the home of the CPV, so it’s not a surprising sight, but what is surprising is the lack of that in Danang and Hoi An. Sure, they still exist, but the volume is turned way down. I got the sense that Duc didn’t like Hanoi, but from his perspective, I get it.

According to some people we met, there is a lot of government corruption. Local officials that have access to a building, or a small plot of land, are cutting deals with foreign capital to get a cut of the profits. Nepotism is a problem too given that well connected families are more likely to get access to resources. If you are outside the party system, you don’t have many resources. Almost everywhere we went, there were construction projects in the works.

We headed back to Hanoi, and oddly enough, the traffic, noise and air pollution was a welcomed sight.  We went out with our friends to their favorite bar, drank, had some cake and called it a night. 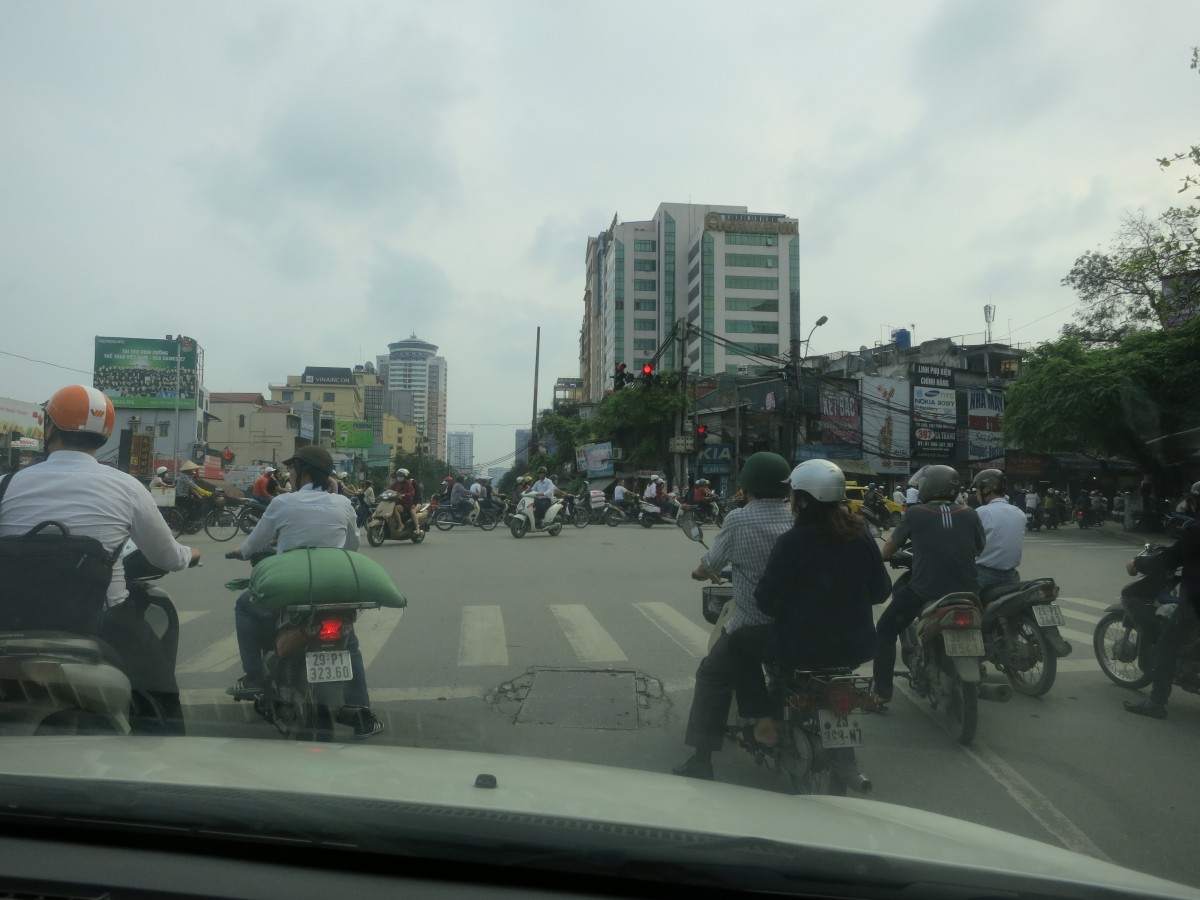 Back in Hanoi watching traffic. 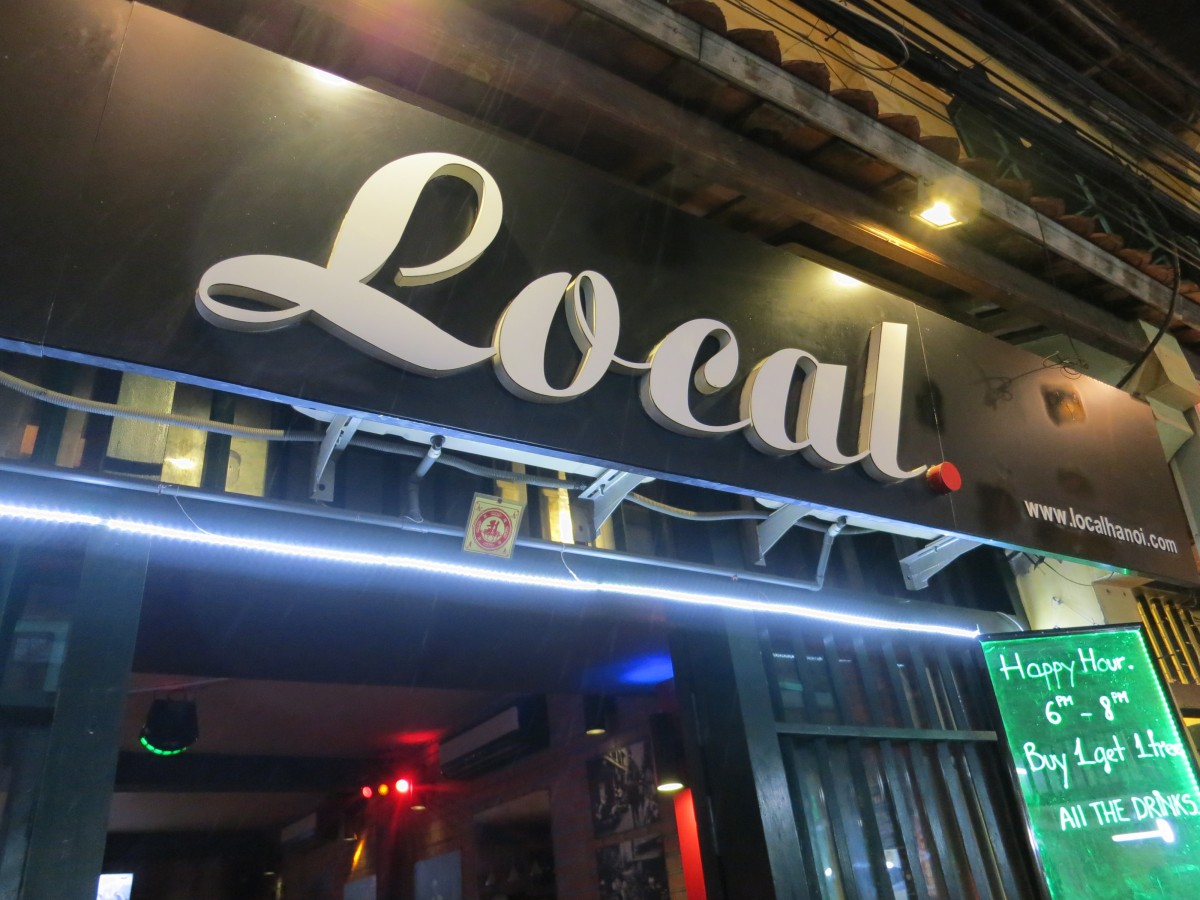 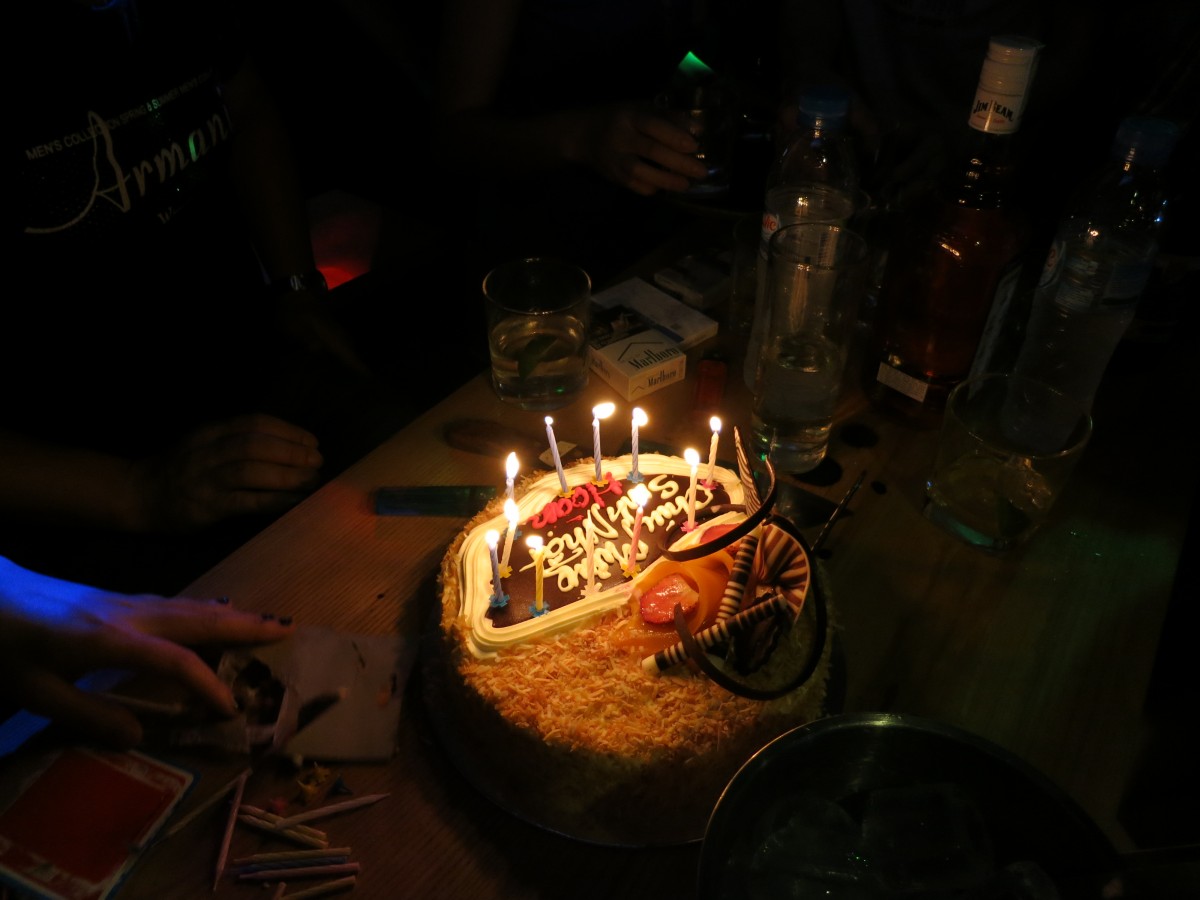 Lina’s brother’s cake, who was at home for some reason. This is at the bar, Local.