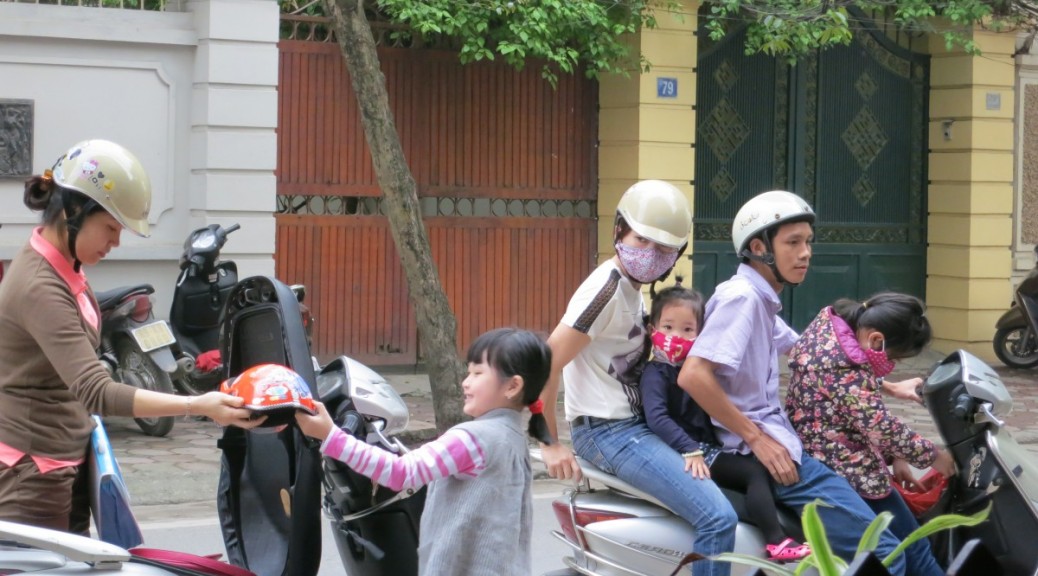 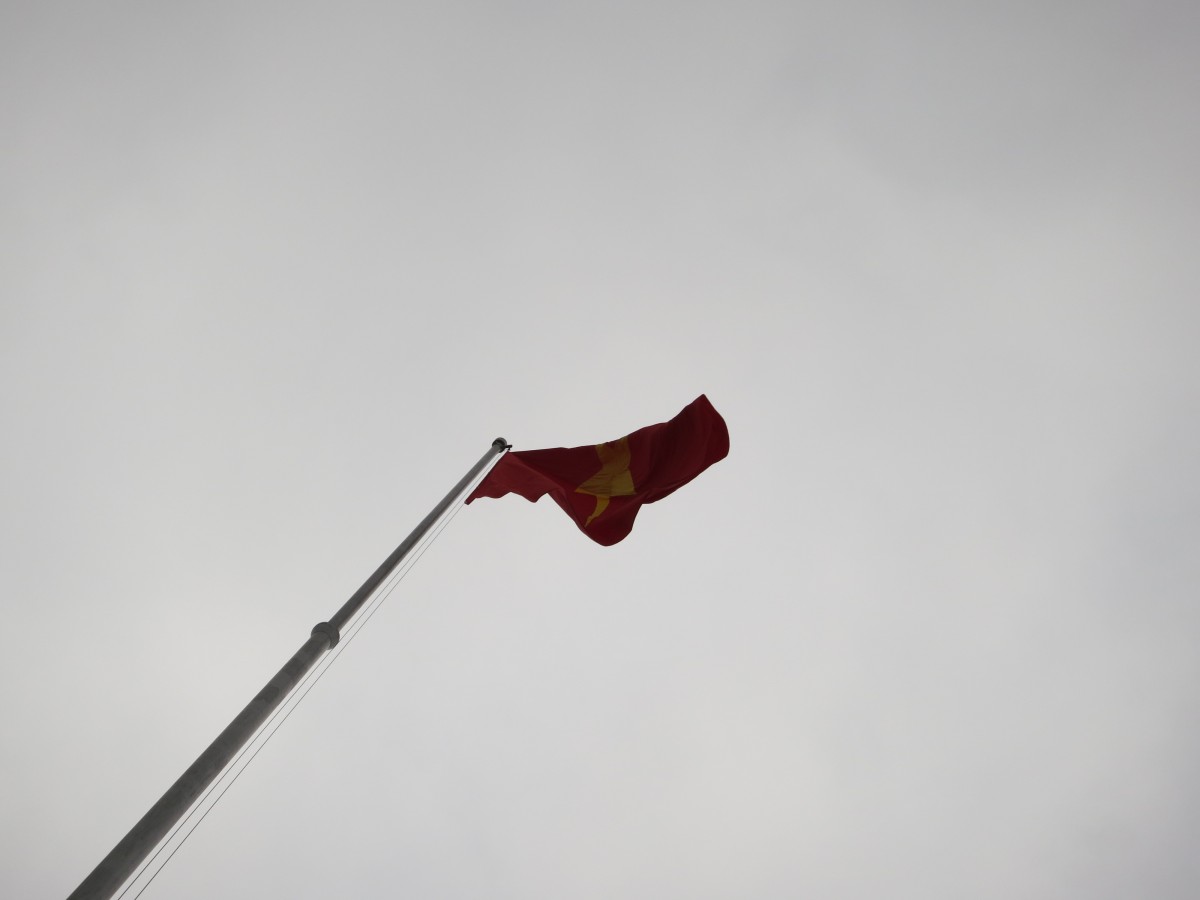 After nearly 24 hours of travel, three planes, two taxis, BART and some walking, I finally arrived in Ha Noi, Viet Nam on Monday March 31st with my friend John Brady. I flew from Los Angeles to Oakland, from San Francisco to Taipei, and from Taipei to Hanoi. I’ve been here nearly a week, and I am humbled by the kindness of the Vietnamese people.

It’s an amazing place, which I’d heard  from people and from reading about it, but it makes it all the more remarkable to me growing up thinking about this country as a war.

Of course, here in Viet Nam, it is called the American war.

I have memories of watching war footage on TV as a kid. I remember the fall of Saigon, now Ho Chi Minh City, and the helicopters above the US Embassy where people were frantically trying to escape as the Vietnam People’s Army liberated the country, with the PAVN in the north and the NLF (National Liberation Front) in the south (“Viet Cong” is a term of US propaganda). The Vietnamese had won, albeit, at an incredibly high price.

Not until years later did I fully understand what I was watching. But, one thing I did understand was that my brother was illegible for the draft. All I remember thinking was that I didn’t want my brother to die, even if by that time the draft and the war had ended, but the idea of war scared me. It was my first anti-war thought, pure fear. 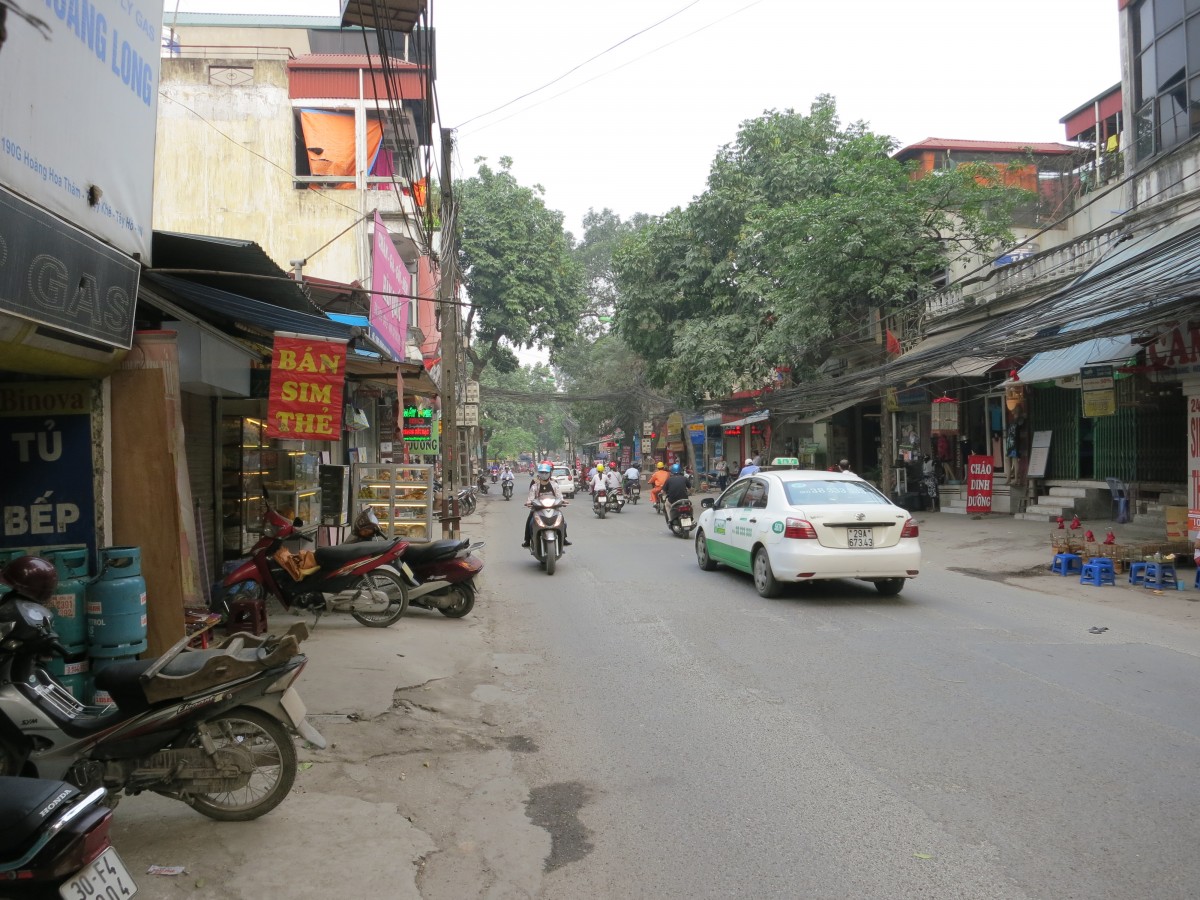 Typical street in Ha Noi. There are 90 million people in Viet Nam, and about the same amount of motorcycles! This street is not very busy at the moment.

By the mid-80s I had seen enough Vietnam war films to be indoctrinated with US propaganda. Even the mildly anti-war films regurgitated out of Hollywood (Platoon, Born on the Fourth of July) were always from the perspective of Americans. Never the Vietnamese.

I didn’t understand how incredibly racist many of those films were. John Pilger, one of the best journalists and film makers around, wrote recently about the 1978 film Deer Hunter:

“Following America’s expulsion from its criminal invasion of Vietnam, The Deer Hunter was Hollywood’s post-war attempt to reincarnate the triumphant Batman-jawed white warrior and present a stoic, suffering and often heroic people as sub-human Oriental idiots and barbarians. The film’s dramatic pitch was reached during recurring orgiastic scenes in which De Niro and his fellow stars, imprisoned in rat-infested bamboo cages, were forced to play Russian roulette by resistance fighters of the National Liberation Front, whom the Americans called ‘Vietcong’.

The director, Michael Cimino, insisted this scene was authentic. It was fake. Cimino himself had claimed he had served in Vietnam as a Green Beret. He hadn’t. He told Linda Christmas of the Guardian he had “this insane feeling that I was there… somehow the fine wires have got really crossed and the line between reality and fiction has become blurred”. His brilliantly acted fakery has since become a YouTube “classic”: for many people, their only reference to that “forgotten” war.”

Only later did I fully realize the extent of the lies that are fed to us through the US media/propaganda system, honed to a fine art by one of the most aggressive, violent, criminal empires in world history. But of course, mainstream logic always presents the US as a benevolent power, forced to act in the world because “Bad Guys” hate our freedom, or whatever is the current fashion of the day, never mentioning the coups, invasions, and outright aggression, with nearly 800 military bases to ensure access to raw materials and markets.

Chomsky and Edward Herman explain in their book, Manufacturing Consent, the mechanical and functional aspects of the US propaganda system.

They compare coverage of East Timor and Cambodia just after the  Vietnam war to illustrate how propaganda works in the US. One quote from that book I’ll never forget: “Propaganda is to democracy what violence is to totalitarianism”. In other words, lies are needed to keep the US public in line, thinking the correct thoughts, and the stick is for those that rebel under authoritarian systems, where it doesn’t much matter what you think.

Interestingly, as the U.S. empire declines, the stick appears to be in much wider use. The  Big Lies are less effective, and only seem to really work on the affluent and the well educated, roughly 20% of the population. NSA surveillance, for example, isn’t about your personal privacy, it’s about state power and instilling fear in the population; functionally, just like the Stasi secret police in the old East Germany. If we are such a democracy, why use mass surveillance to spy on everyone?

The US subverted and prevented the free elections and unification planned at Geneva in 1954, attacked and invaded South Vietnam, propping up a puppet government while choosing it’s leaders, conducted acts of terrorism in the south starting in 1962 (prior, they used mercenaries to conduct terror campaigns by proxy), manufactured the Gulf of Tonkin incident in 1965 to get the US into a full war (a false-flag operation), lied repeatedly to the US public as exposed by Dan Ellsberg in the Pentagon Papers, and killed between 3 and 4 million people.

The official CIA number is around 2 million, but other estimates almost double that when you take into account the bombings of Laos and Cambodia. I recommend reading this Chomsky interview and this article.

The estimates for the numbers killed, referenced in the article listed above,  are:

Hanoi reported 2 million civilians killed, 1.1 million North Vietnamese and southern resistance fighters killed, and 300,000 missing in action. U.S. reported 225,000 killed in the army of it’s client regime (“South Vietnam”). The CIA estimates 600,000 Cambodians killed. Tens if not hundreds of thousands were killed in Laos by U.S. attacks. About 58,000 U.S. soldiers were killed with about 2,000 MIAs.

These are holocaust level numbers.

I don’t remember what year it was that I finally saw Hearts and Minds, a documentary film that attempted to tell the truth about the war, but it was ground shattering. If you haven’t seen this film, watch it right now on Youtube. It connects the violence of US culture with the war in Vietnam. You actually hear the voices from the Vietnamese perspective.

The mentality of those who run the US Empire is on full display in Hearts and Minds, and little has changed in that regard. “War is the health of the state”, as radical writer Randolph Bourne said in the context of WWI. More bombs were dropped on Vietnam than the total combined tonnage of WWI and WWII.

In a sane world, US leaders who ran that war should have faced prosecution at a Nuremberg style criminal court for war crimes, torture, terrorism and the deliberate targeting of civilians (ditto for Iraq, Afghanistan, etc, etc, etc).

It’s almost difficult to believe. One of the interesting statistics I’ve recently learned is that almost 2/3 of the people in Viet Nam were born after the war ended. So for most, they only know the stories of the war through their history, or through family that survived. One friend we met, whose father fought in the war and lost many friends, says her dad doesn’t like to talk about it, which sounds like a universal truism.

Like anywhere else in the world, young people want to have a good time, go out with friends, and live a meaningful life. We have been lucky to meet some amazing people so far, and have been treated to the best spots to drink, eat, and get hair cuts. Yup. We even had a couple locals come over and make us dinner. And we love Vietnamese food! For two vegetarians traveling, you can’t do much better. 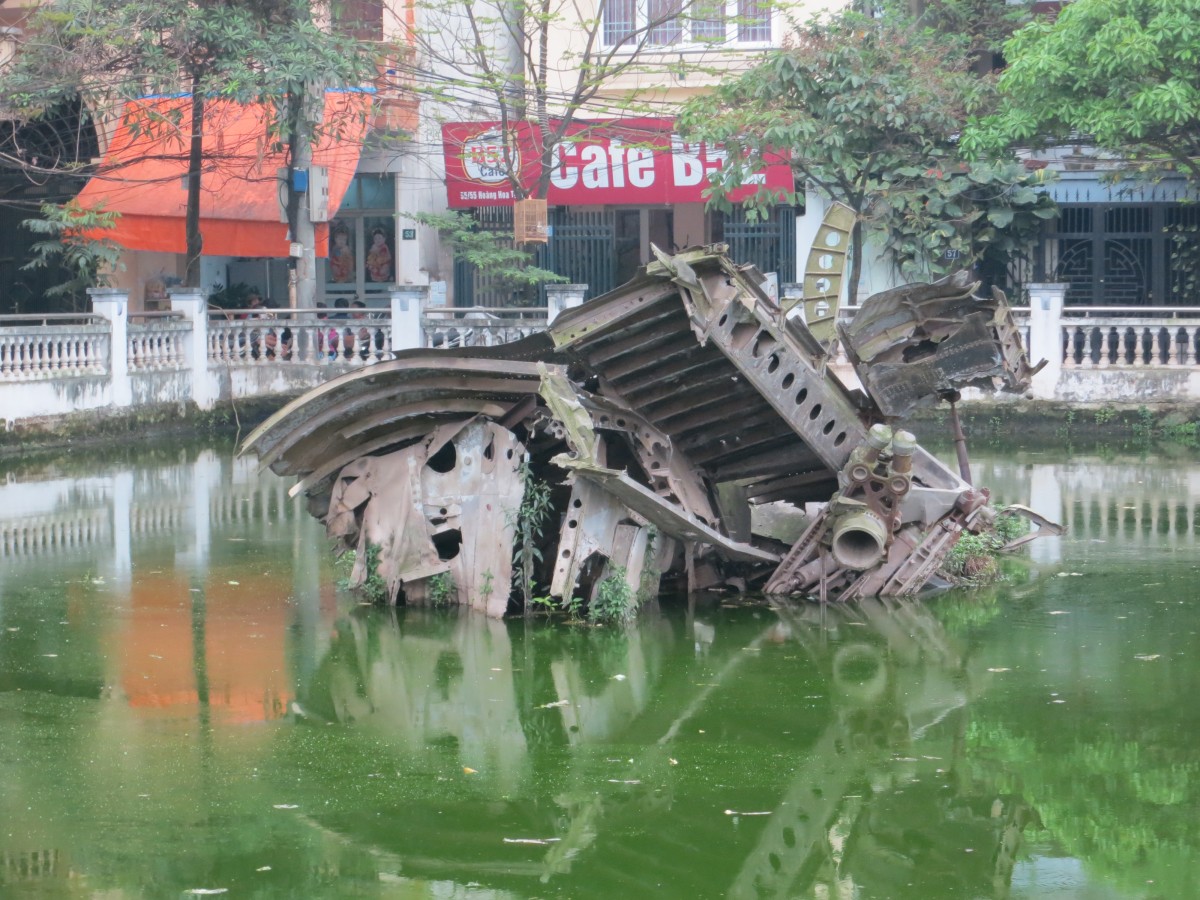 Wreckage still sitting in a small lake in the middle of Ha Noi, from a downed B52 during what is called “Dien Bien Phu in the Air”. Notice the cafe on the other side of the lake called Cafe B52.

In my next posts, I’ll be writing and posting pics from our visit to the Ho Chi Minh Mausoleum, Ha Long Bay,  the Ho Chi Minh museum, and a museum dedicated to the downing of American B-52s, holy shit! There’s even wreckage still lying in a small lake in the center of town. A local named Moan (Moh-On) took us around. He asked us if we wanted to see where John McCain was shot down! LOL. YES! 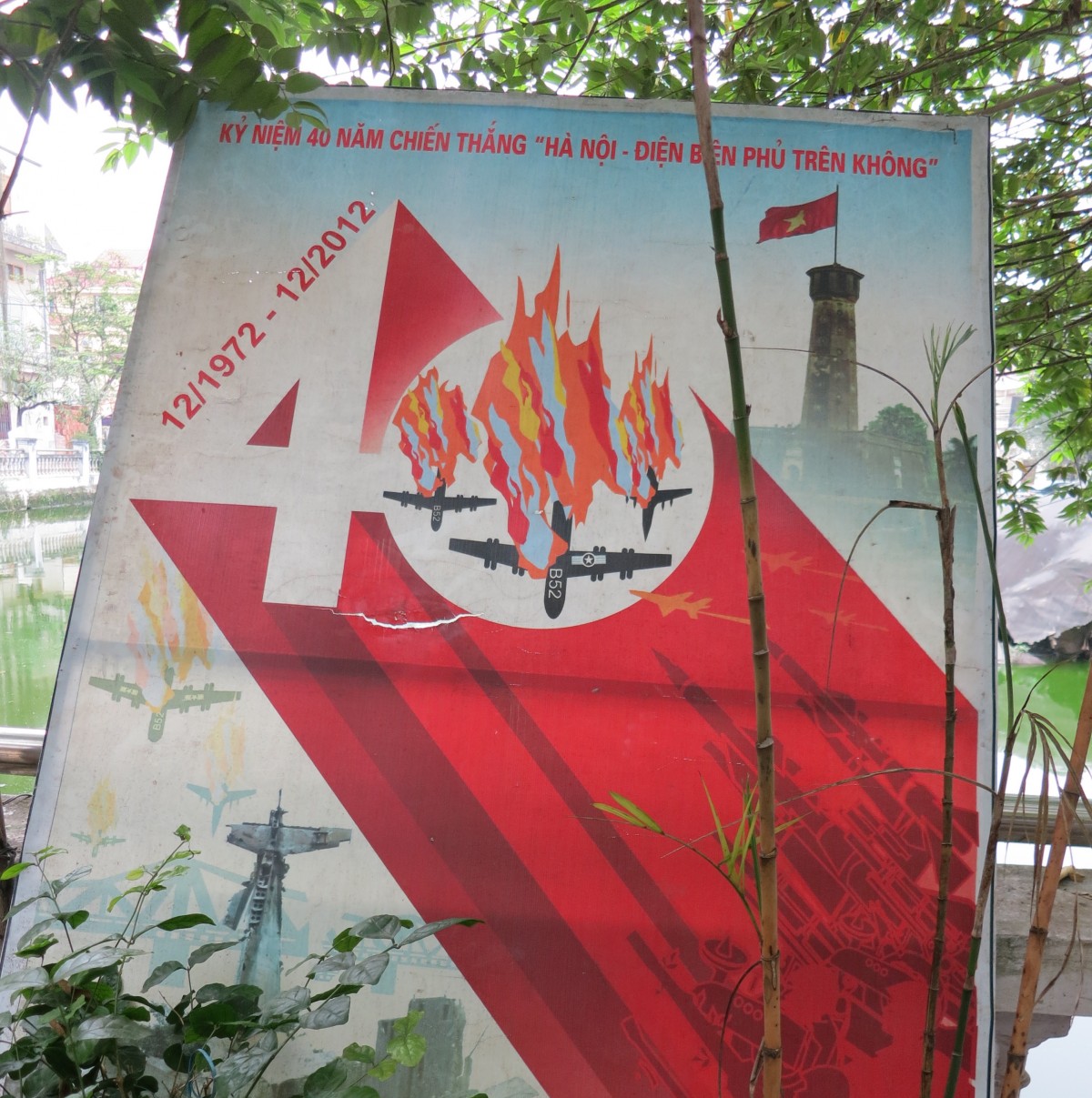 40th Anniversary billboard sitting next to the downed B52 in Ha Noi. It’s celebrated as “Dien Bien Phu in the Air!”, a major victory against the massive bombing of civilian targets by the US.

McCain didn’t fly in B52s, but was shot down in a fighter jet (and saved by locals, of course), then imprisoned at Hoa Lo, or the “Hanoi Hilton” prison.

In December of 1972, nearly fifty planes were shot down by the Vietnamese, and was considered a major victory, which is called “Dien Bien Phu in the Air!”. Dien Bien Phu is the location of the defeat of the French in 1954.