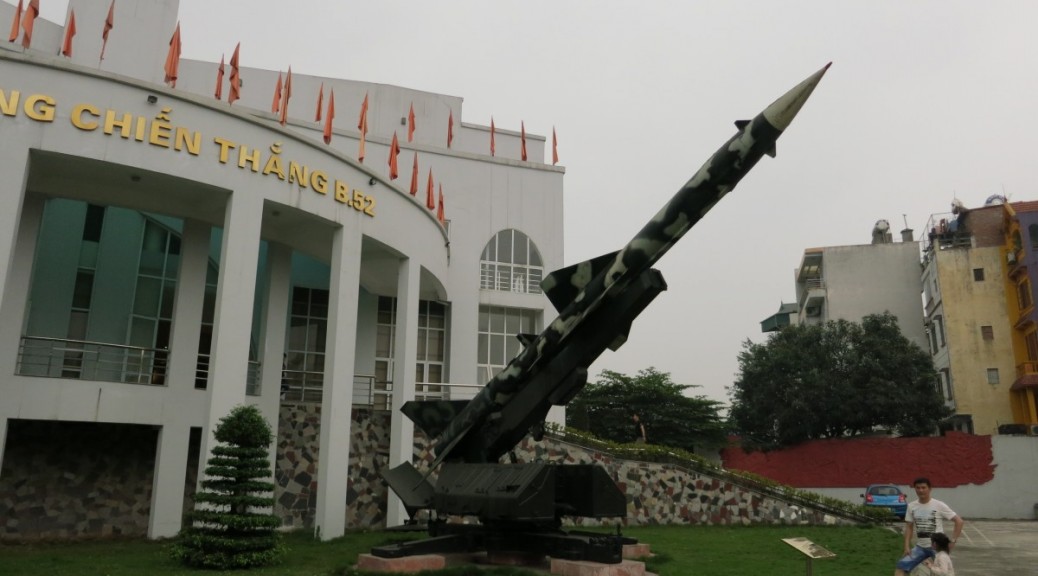 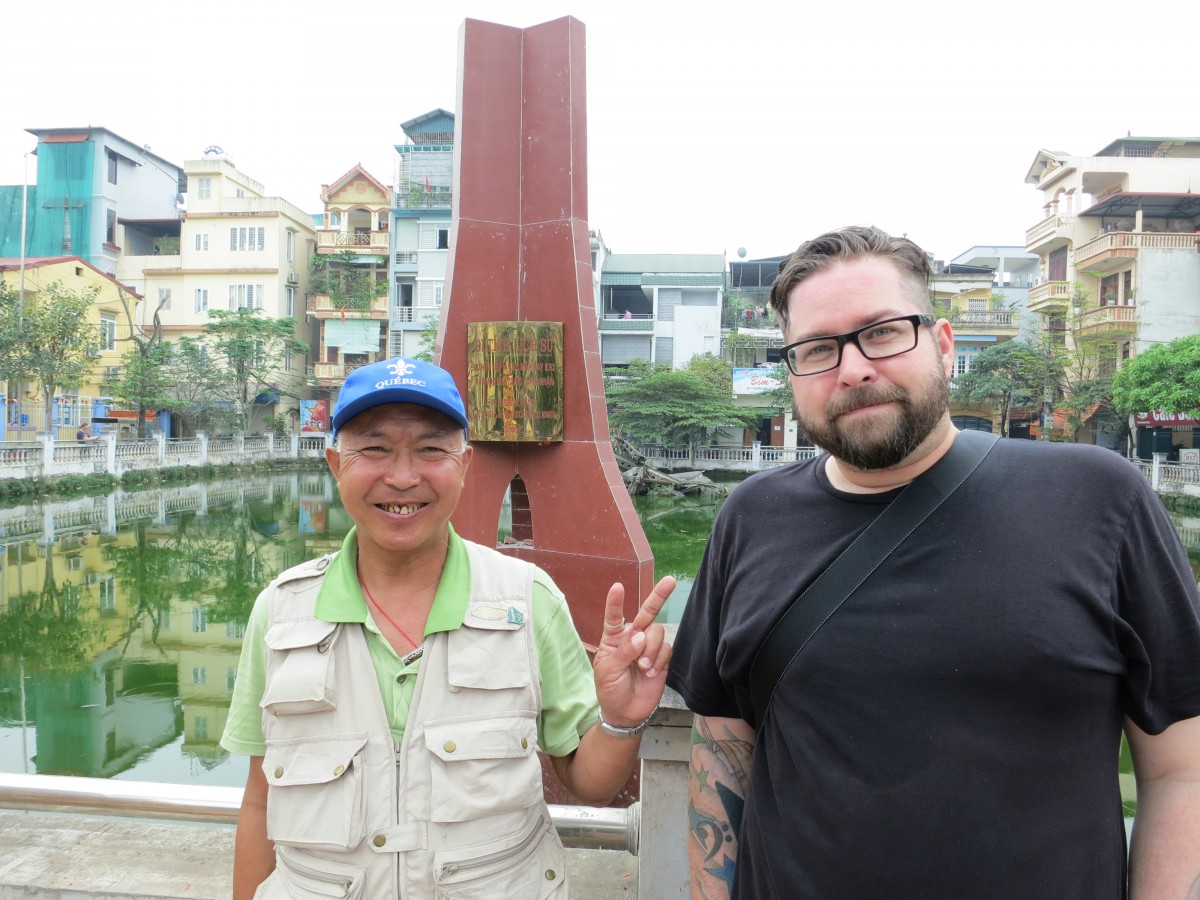 Duon and John in front of Huu Tiep Lake. Notice the wreckage of the downed B52 in the background. Duon was too young to serve in the American War, but remembers the bombings well.

“Operation Linebacker II“, the US name for the bombing on Ha Noi from December 18 – 29, 1972, also known as the “Christmas bombings”, was the brainchild of Henry Kissinger and Richard Nixon. From reading the American perspective on this bombing, it is said that the operation forced the North back to the negotiating table in January in which the Paris Peace Accords were signed on January 27th, 1973.

From the North Vietnamese perspective this battle was a victory, referred to as “Dien Bien Phu in the Air”, a reference to the victory over the French in 1954. Although the peace talks resumed in January of 1973, the North insisted that stopping the bombings was not a precondition to resuming the talks.

Pictures below illustrate how the CPV (Communist Party of Vietnam) wants to remember this battle.  I understand why, from their position, it’s important to remember this attack as a victory, but it’s hard to reconcile that term when there was so much death and destruction involved.

Neighborhoods were leveled, a hospital was obliterated and its estimated that around 1000 civilian deaths occurred, primarily women and children given that most men were off fighting the war. Yet, they insist their resistance reduced the enemy’s will to fight.

Of course, the downing of so many US B52s did put a tremendous strain on the US war machine, including the budgets of the Pentagon at the time, challenging the US air superiority with up to date Russian air defenses, and it shook the confidence of pilots who were used to dropping their bombs without much of a challenge. At a time when the anti-war movement was at it’s climax and the war’s popularity was at an all time low, the resistance displayed by the North during these bombings was no small matter.

The use of the phrase “Operation Linebacker II” is instructive as well. If you have seen the documentary Hearts and Minds, you would quickly recognize the connection between football culture and war, something I’ve considered for a long time. To borrow the phrase from Louis Proyect, the Super Bowl is a kinda quasi Nuremberg rally, with its hyper-patriotic gibberish riddled throughout, and from the presence of military personnel on the playing field to the flying of fighter jets overhead at halftime, it is a kinda ground zero for indoctrinating the young for American Exceptionalism (i.e. we are “number one”, can attack anyone, anywhere, for any reason). 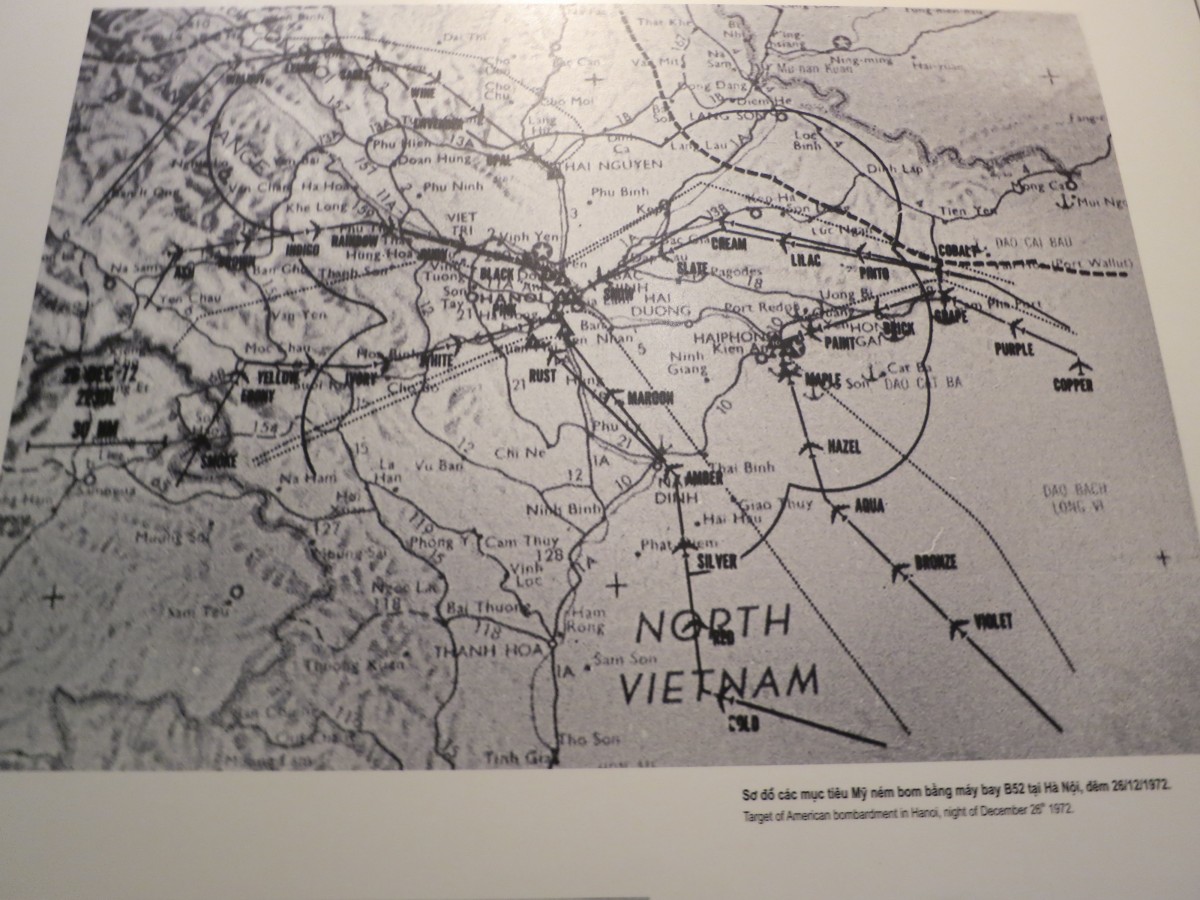 I must admit, I am pretty removed from the rhetoric of the era to properly write about the nuances of the war. Up until more recently, I had read little about the Vietnamese government’s position. What I did read was from those in the anti-war movement in the US.

I think it’s instructive for the reader to hear and see what the official line is here in Viet Nam. I’m hesitant to regurgitate official propaganda from any government without a full review, but I know that the American version, as I discussed in my first post, is so full of lies that it’s valuable to hear.

I consider any bombing of civilian targets to be the definition of terrorism, so in that sense, what happened during the December, 1972 bombings certainly qualifies as terrorist. The US attack on Viet Nam was an act of international aggression, the highest war crime defined by the Geneva convention (signed by the US), not to mention the 3-4 million Vietnamese killed during the war, the use of chemical weapons (Agent Orange continues to deform the newborn), and the counter-insurgency and assassination program known as Phoenix. 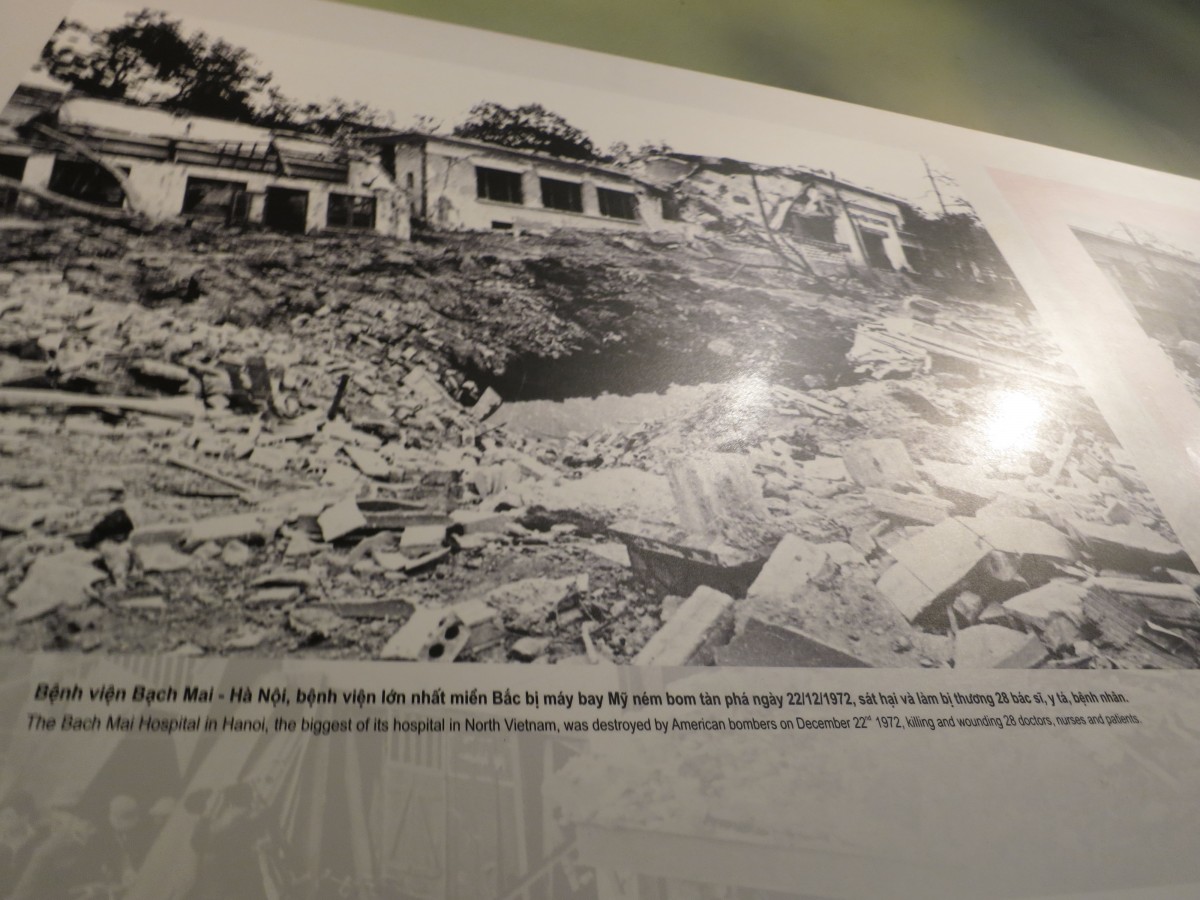 Caption reads: The Bach Mai Hospital in Hanoi, the biggest of its hospital in North Vietnam, was destroyed by the American bombers on December 22, 1972, killing and wounding 28 doctors, nurses and patients. 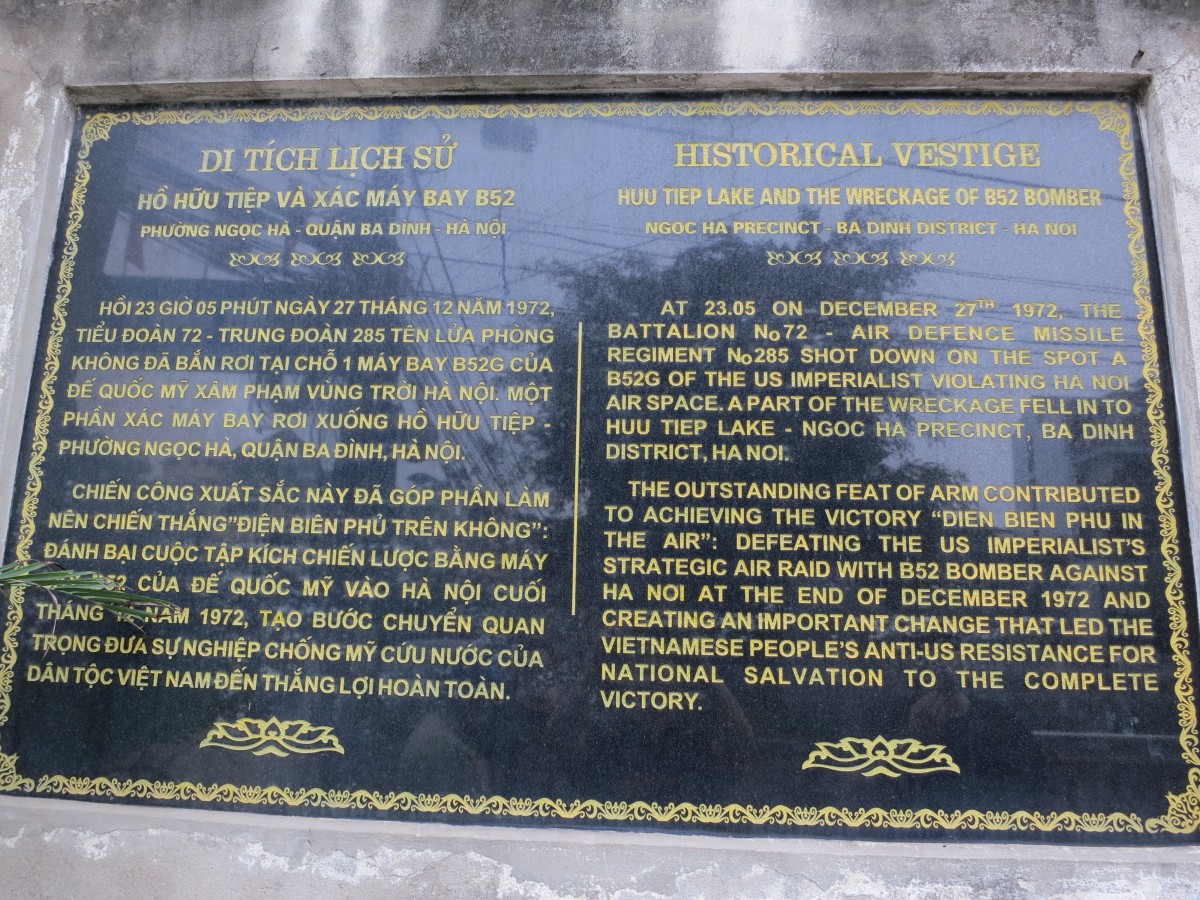 Inscription located on building next to Huu Tiep Lake, where the remains of a downed B52 still resides. Note the reference to “Dien Bien Phu in the Air” and the defeat of the “US Imperialists”.

Doan took us to the “Museum of Victory”. Here’s the entrance: 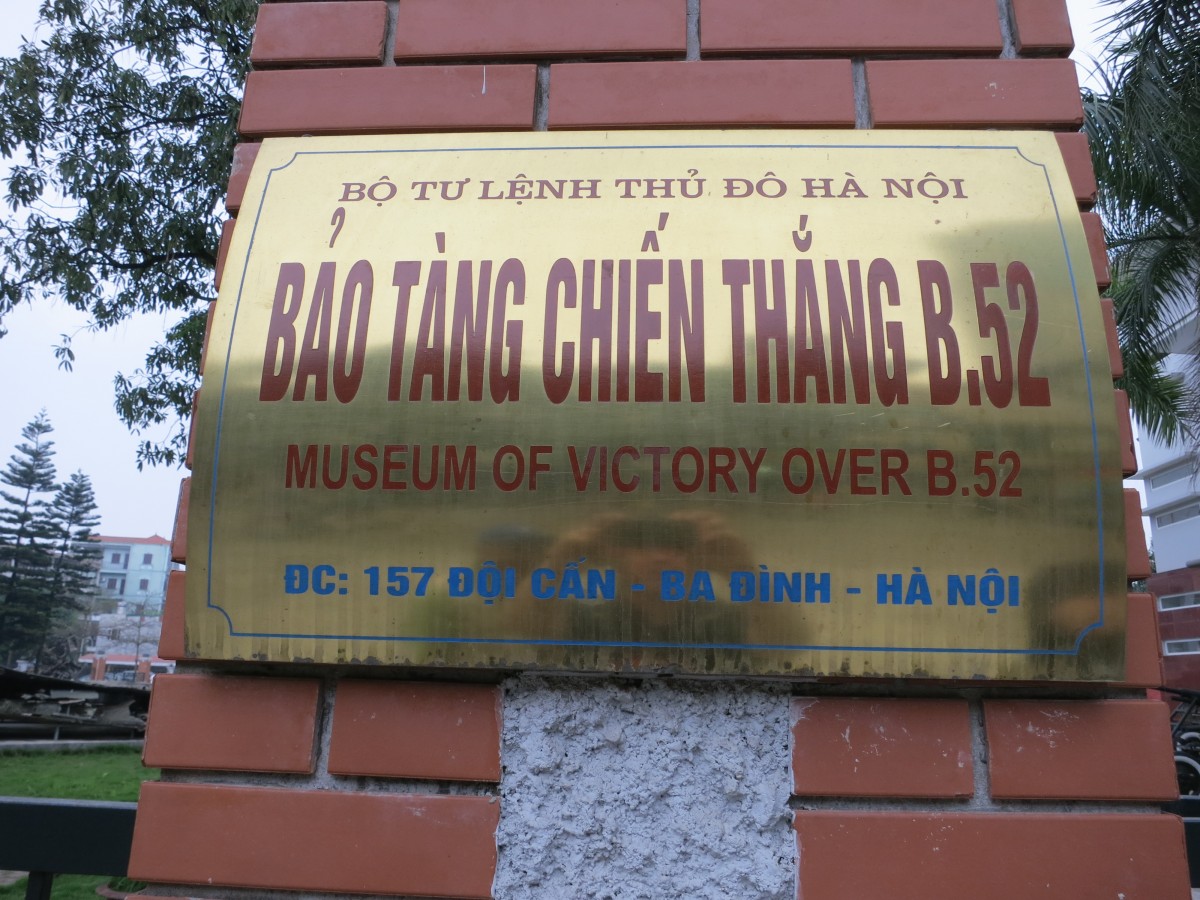 Plaque in front of Museum

Here’s a picture of B52s dropping their bombs over Vietnam: 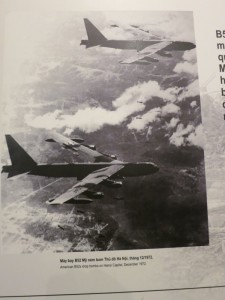 Here’s a pic as you walk in the museum: 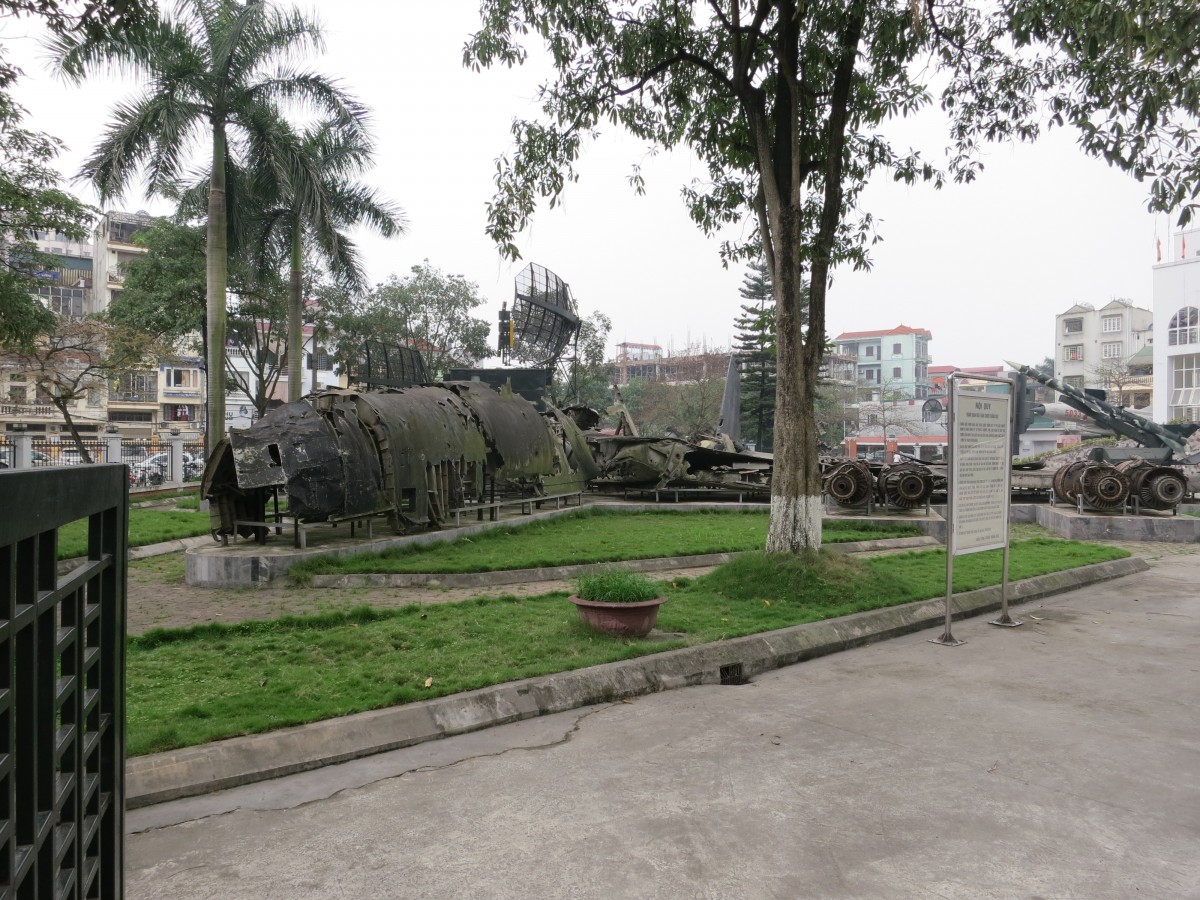 Entrance to the B52 Museum. That is a downed B52 laid out from the what was left of the wreckage. Notice the Russian radar system in the back (left) and the Russian SAM on the right.

Here’s what many of the bombs dropped all over Viet Nam look like: 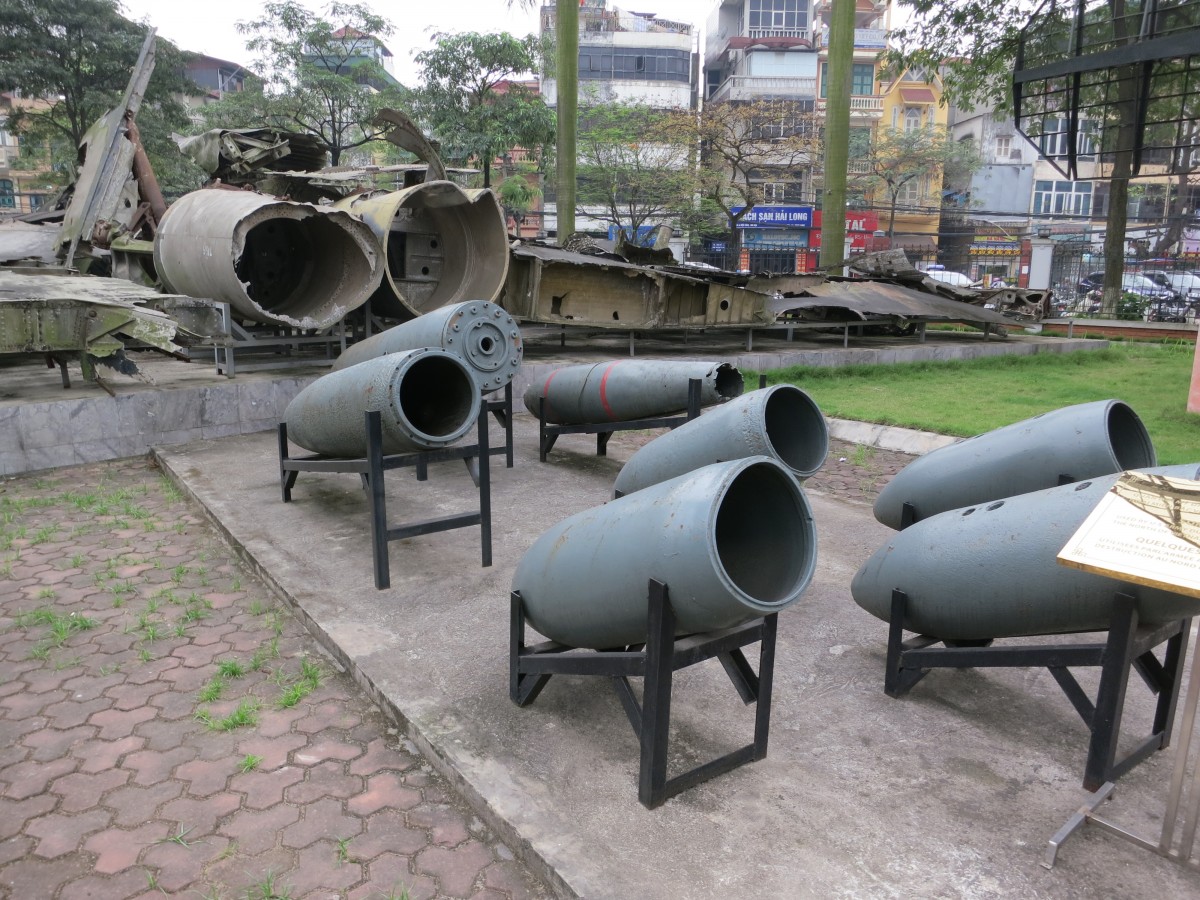 Type of bombs dropped on civilian targets during the December 1972 bombings over Ha Noi.

Here’s the plaque in front, as seen above just to the right: 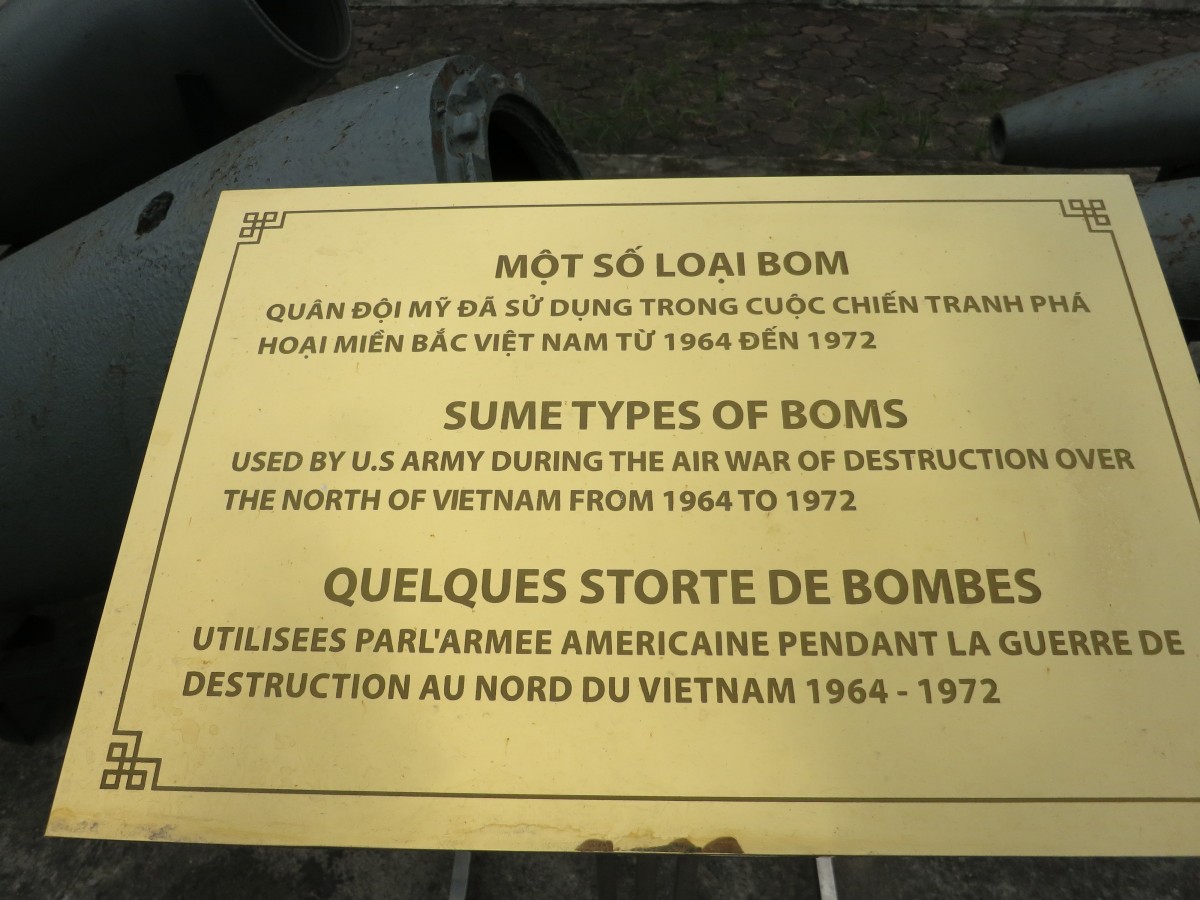 Plaque sitting in front of US bombs.

This is the front of the Museum: 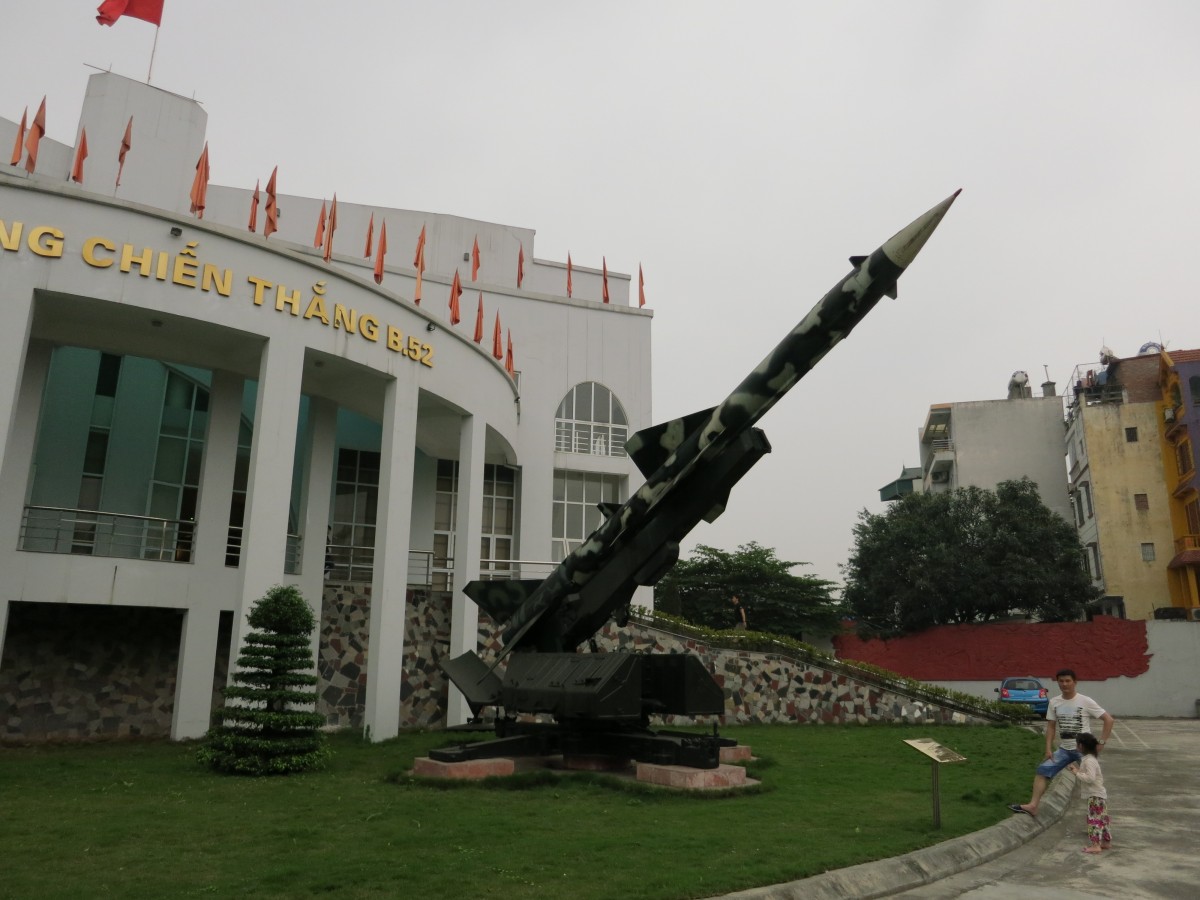 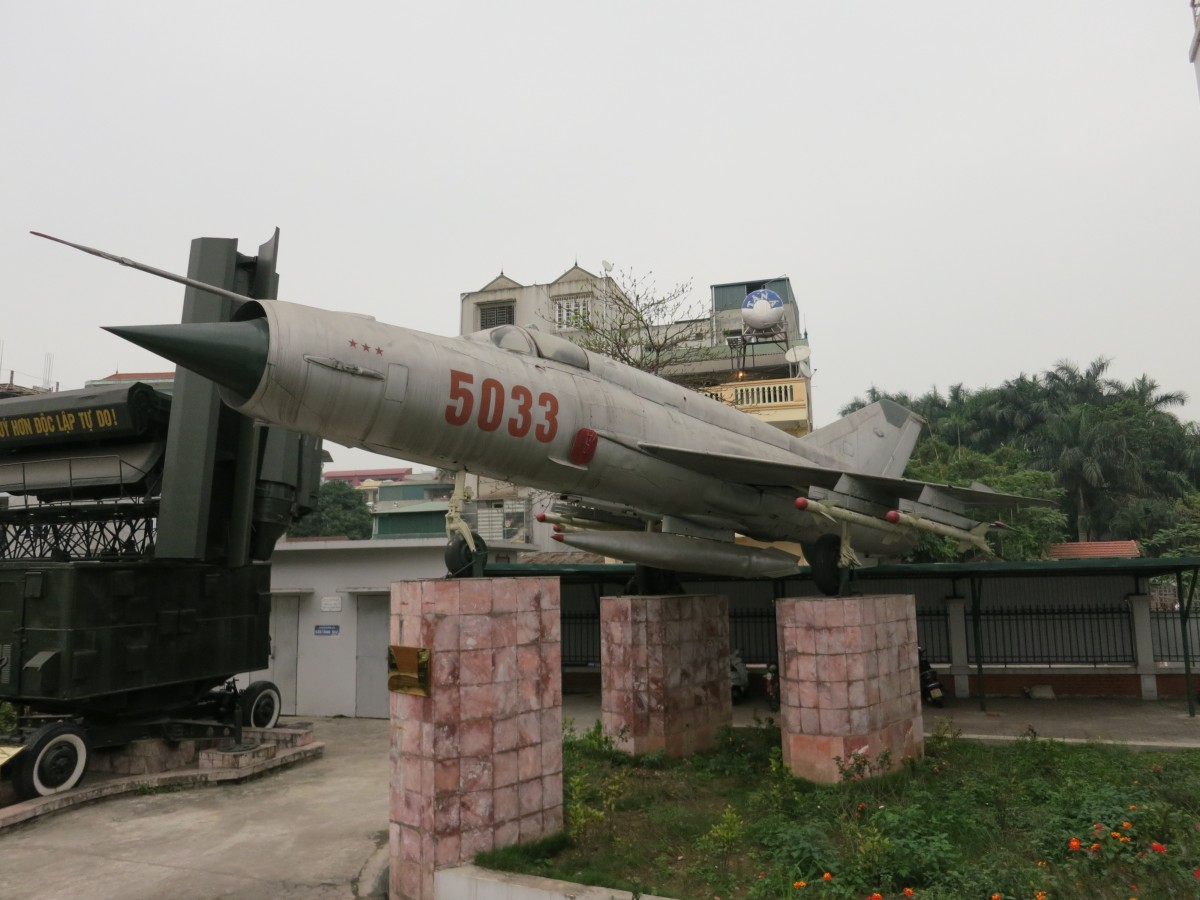 Russian MIG fighter jet. Notice the 3 stars on the side. This represents 3 kills.

Here’s a list of the planes shot down in December of 1972: 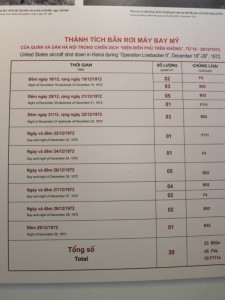 A ball of wreckage: 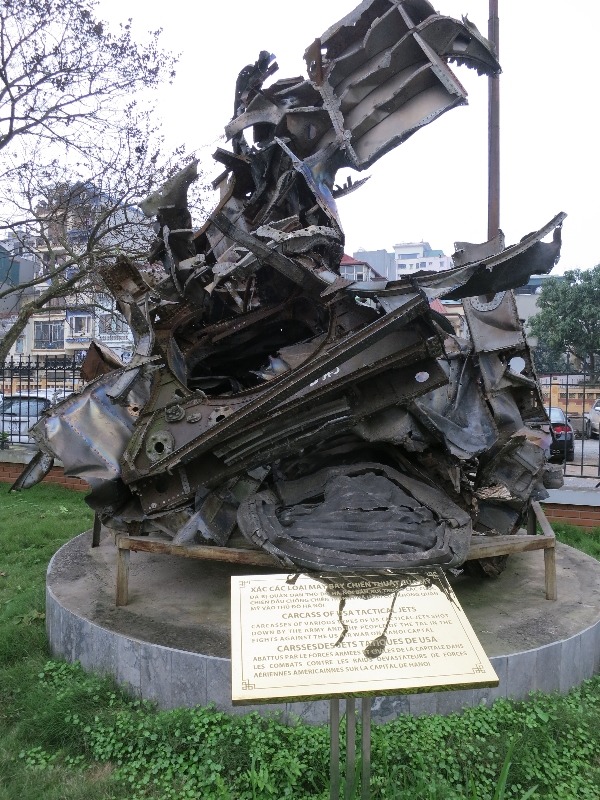 Plaque reads: Carcasses of various US tactical Jets shot down by the army and the people of the Tal in the fight against the US war on Hanoi capitol.

The plaque in front of the “carcasses” of wreckage: 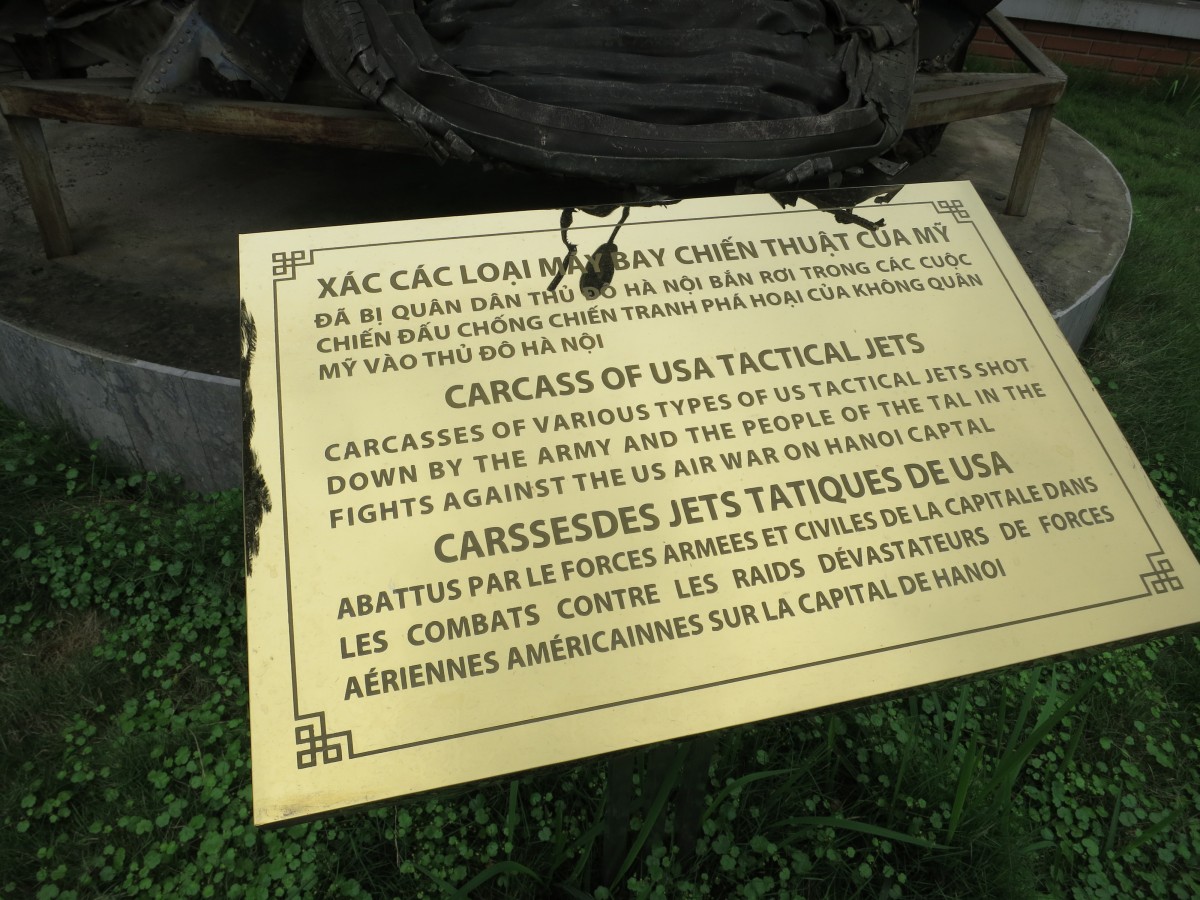 Plaque in front of a mess of metal from US aircraft that were shot down.

A wheel from the wreckage with the imprint, “GOODYEAR USA”: 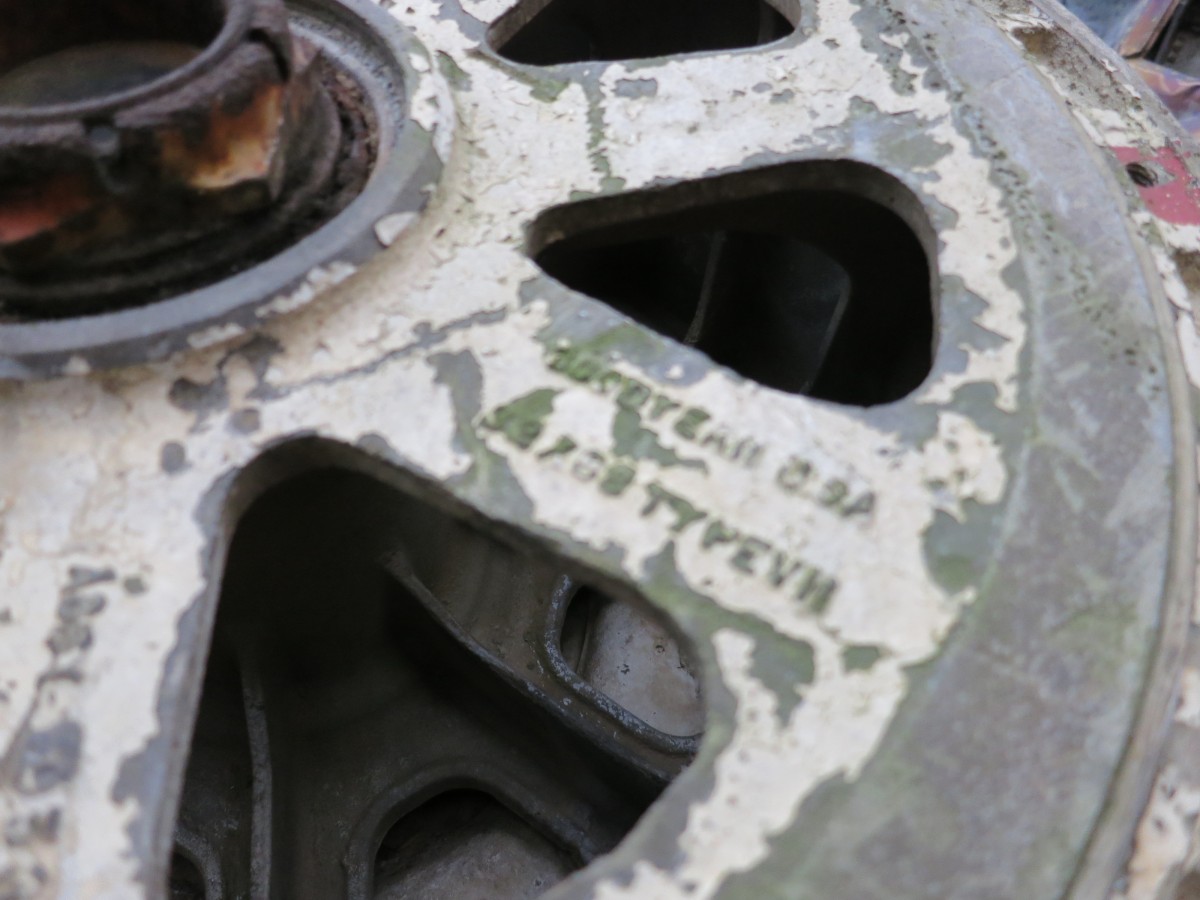 A wheel from a fighter jet in the “carcasses” of shot down jets. Notice that the inscription on the wheel says, “Goodyear USA”

A display celebrating the downing of the bombers. Note the flames, the parachutes, and the capture of pilots: 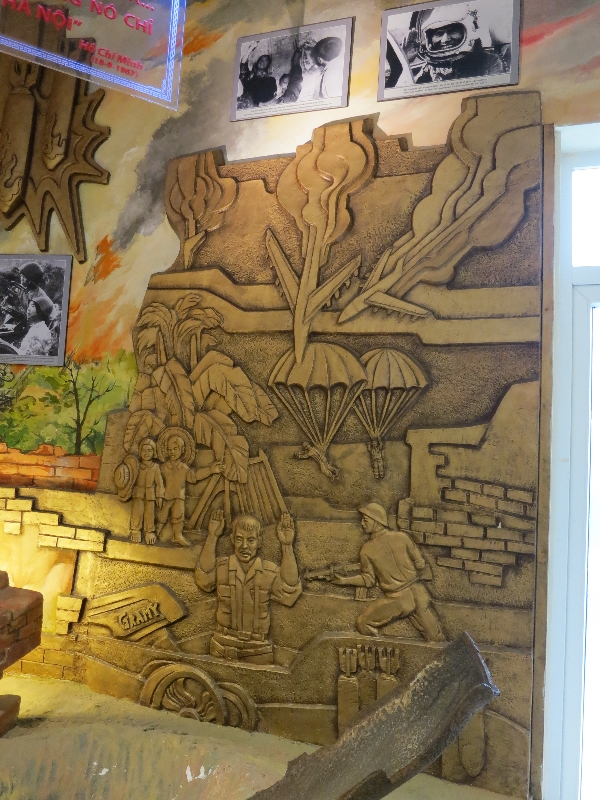 Display inside the museum of downed B52s showing burning B52s falling out of the sky, pilots ejecting, and then captured.

John McCain, former presidential candidate, and recently, supporter of neo-nazis and bigots in the Ukraine, was shot down over Vietnam and held prisoner for 5 years by the North.

Below is a pic of what is claimed to be John McCain’s pilot uniform. This was not from the Museum of Victory, but from the Hoa Lo prison where McCain was held, also referred to as the Hanoi Hilton. John McCain, in his not so eloquent racist blather, was quoted on his 2000 campaign bus as saying, “I hate the gooks. I will hate them as long as I live.”

For risk of stating the obvious, there are millions of us who despise John McCain, his racist politics, and his support for neo-nazis the world over. 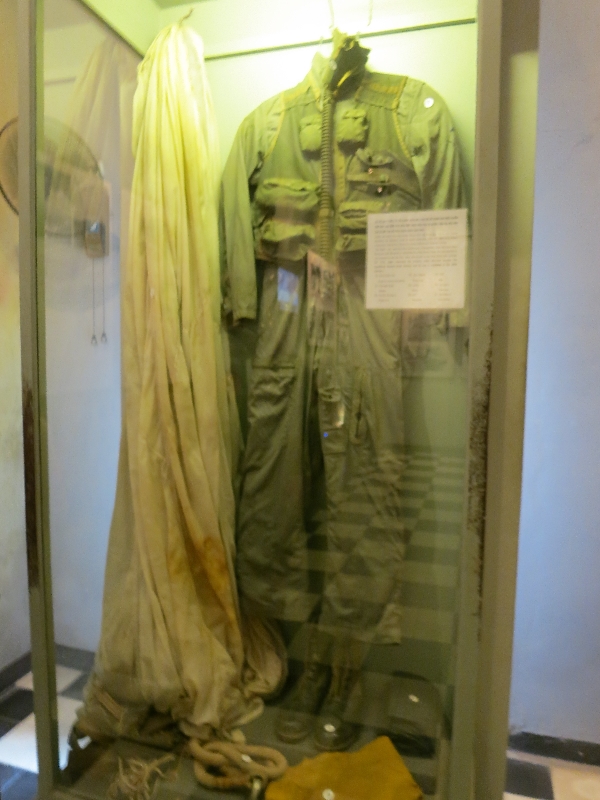 This is allegedly John McCain’s flight suit. On display in the Hoa Lo prison museum, often referred to as the “Hanoi Hilton”