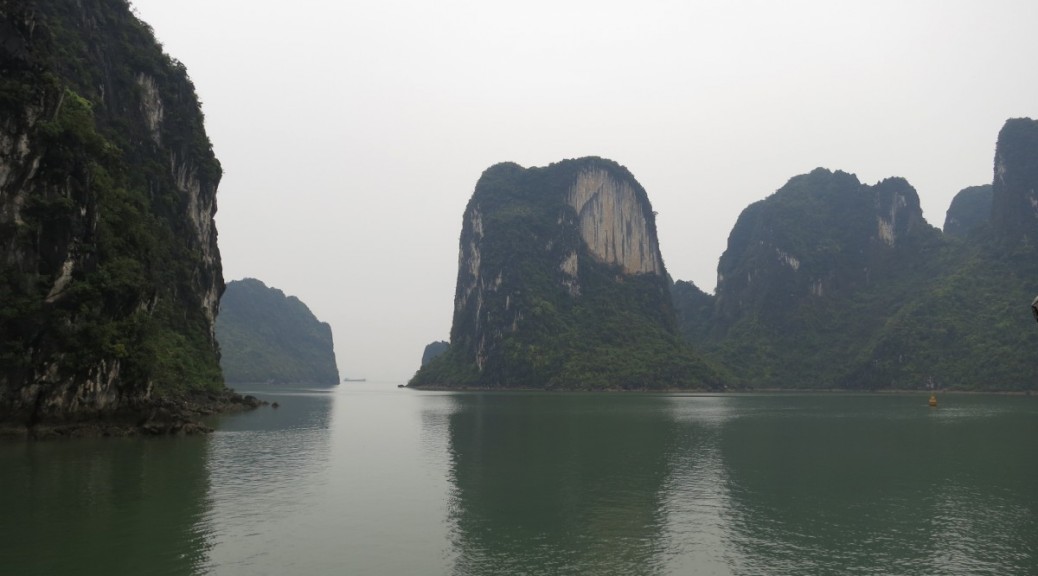 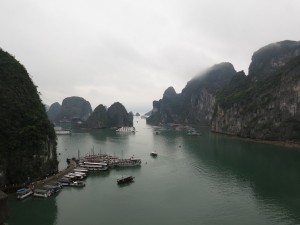 Ha Long Bay is one of the new “seven wonders of the world”, as I discovered reading a billboard in the national park. It’s composed of around 2000 limestone islands in an area of about 1500 sq km, or about 25 x 25 miles. It’s massive, and it’s fucking beautiful.

The islands are the result of five hundred million years of geological activity involving sea regression, tectonic down-warping, and sea transgression. It is composed of sedimentary deposits containing the remains of ancient flora and fauna in many forms, including plants and animals that are long extinct.

John and I took a two day tour of the park this past week, and got on a 3 hour bus ride from Ha Noi to the Ha Long Bay port where we boarded the “Classic Sail” for the night. Our tour guide’s name was Tun (Too-en). He was from an area between Ha Noi and Sappa, which is to the north, near the border with China.

As I mentioned in my previous post, the Vietnamese people we have encountered have been very kind, and this trip was no exception. Sure, we paid money to do this tour, and yes, they are aiming to please us given that tourism is an important part of their economy. But to me, this wasn’t just an expedition to make money.

Tun and the crew are proud of what Viet Nam has to offer, not just culturally, but it’s beauty. They told us how much they love being out here, a kinda pride in showing us Ha Long. For what it’s worth, I believed it and felt it. Like anyone that experiences the wild, the outdoors, and understands its ability to transcend normalcy, I was deeply moved by this place.

On more than one occasion, I’ve had locals remind me that Viet Nam is a poor country, and that people are doing their best to make a living. I have no problem supporting those I’ve met with my tourist dollars. I am not pretending this is some radical political tour, but I am trying my best to be conscious about the context I am in. I am trying to engage people on a human level as much as possible (as opposed to seeing everything through my own biases, politics, analysis, etc), and to check myself on my own class privilege, not forgetting the history between the US and Viet Nam. 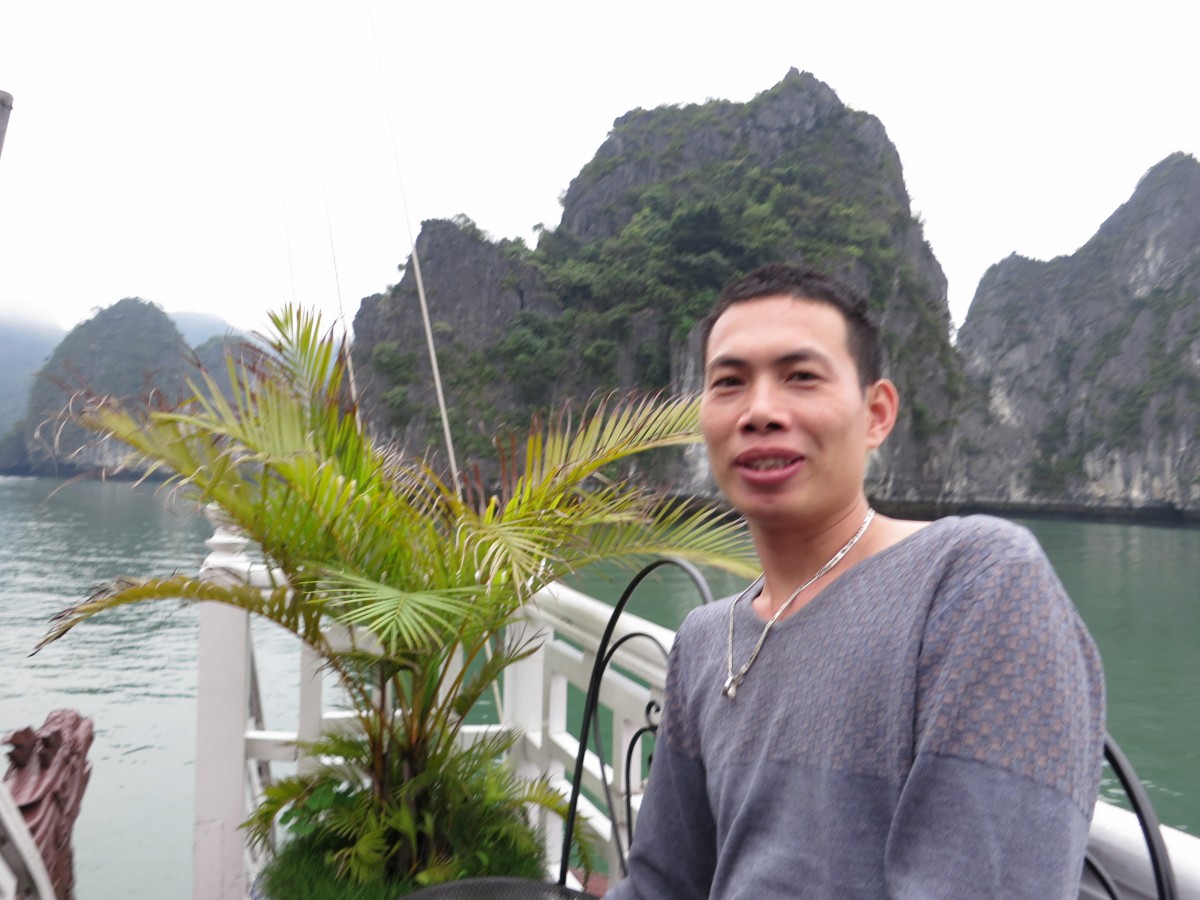 Tun, our tour guide, on board the Classic Sail

We were joined by 3 people from France, two from Malaysia, and 2 others from the US. Now, normally, John and I are not of the taking tour types. But to see a place like this, you kinda have to do it right, and get on a boat with locals who can explain what it is you are seeing, and of course, know where to go.

The crew of the “Classic Sail” were phenomenal. For me, it’s awkward to be treated like the tourist I really was, but I did my best not to act like one, in the sense of expecting any special treatment, or being a whiny asshole. And yes, one of the other Americans was a whiny asshole. Absolutely, horrendously embarrassing. 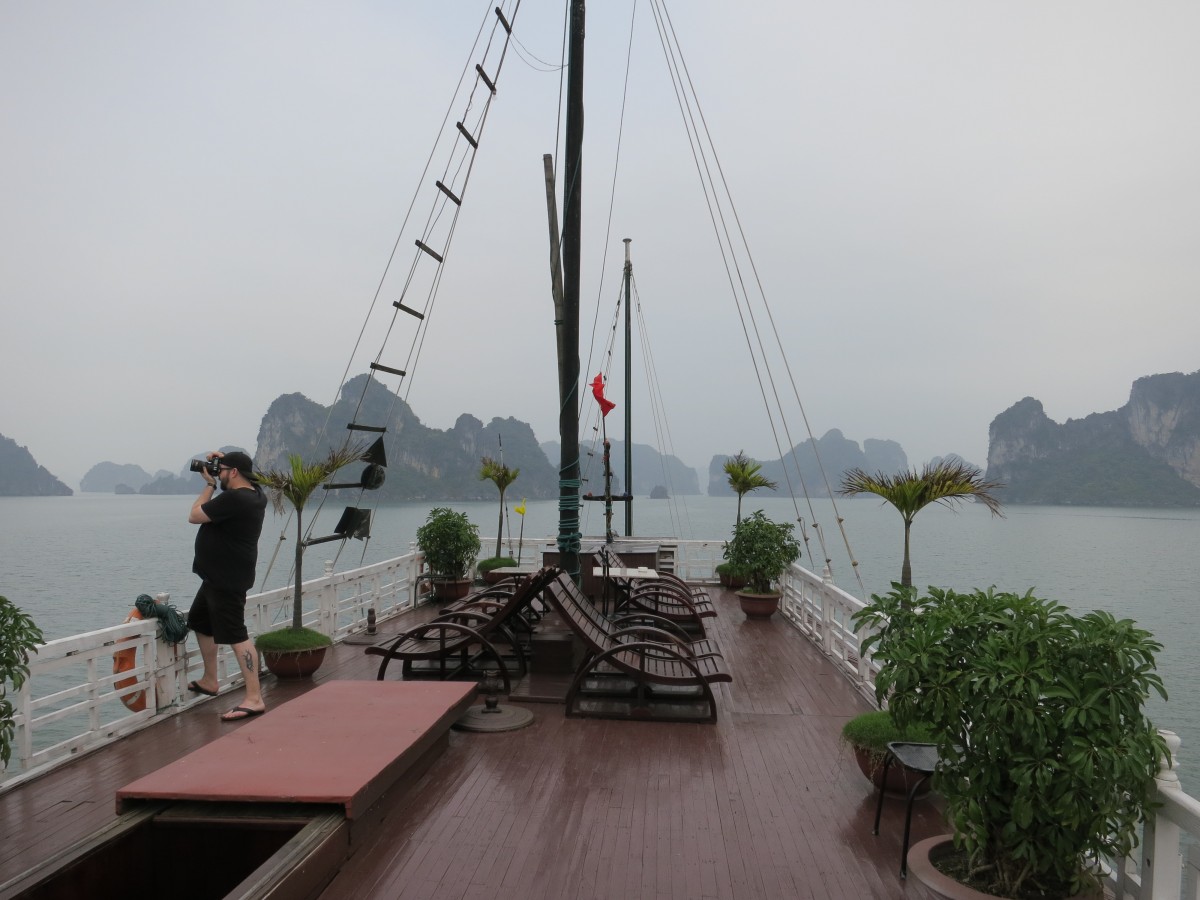 On the top deck

John on the boat: 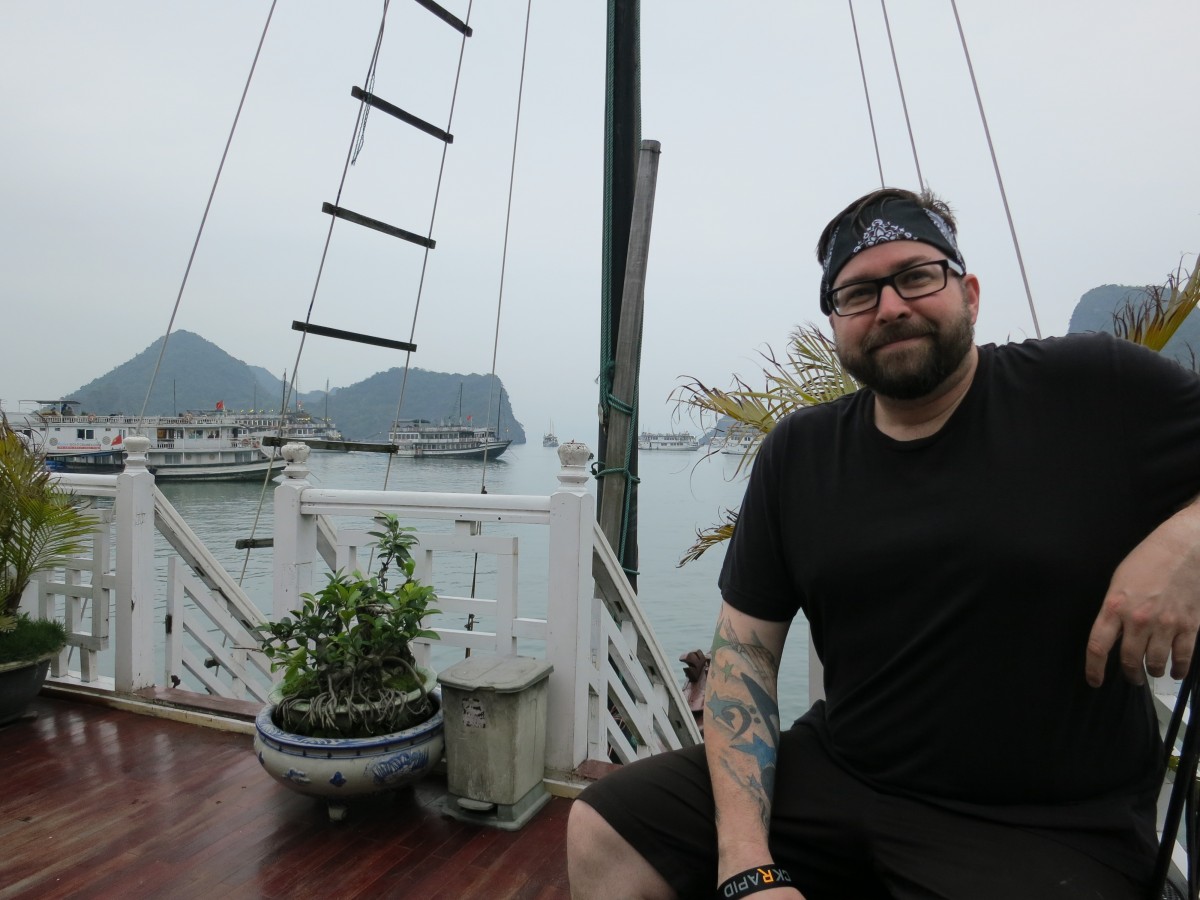 The food the cook prepared was the best we had had in Viet Nam up to that point. We were totally blown away, and they accommodated our veggie diets. 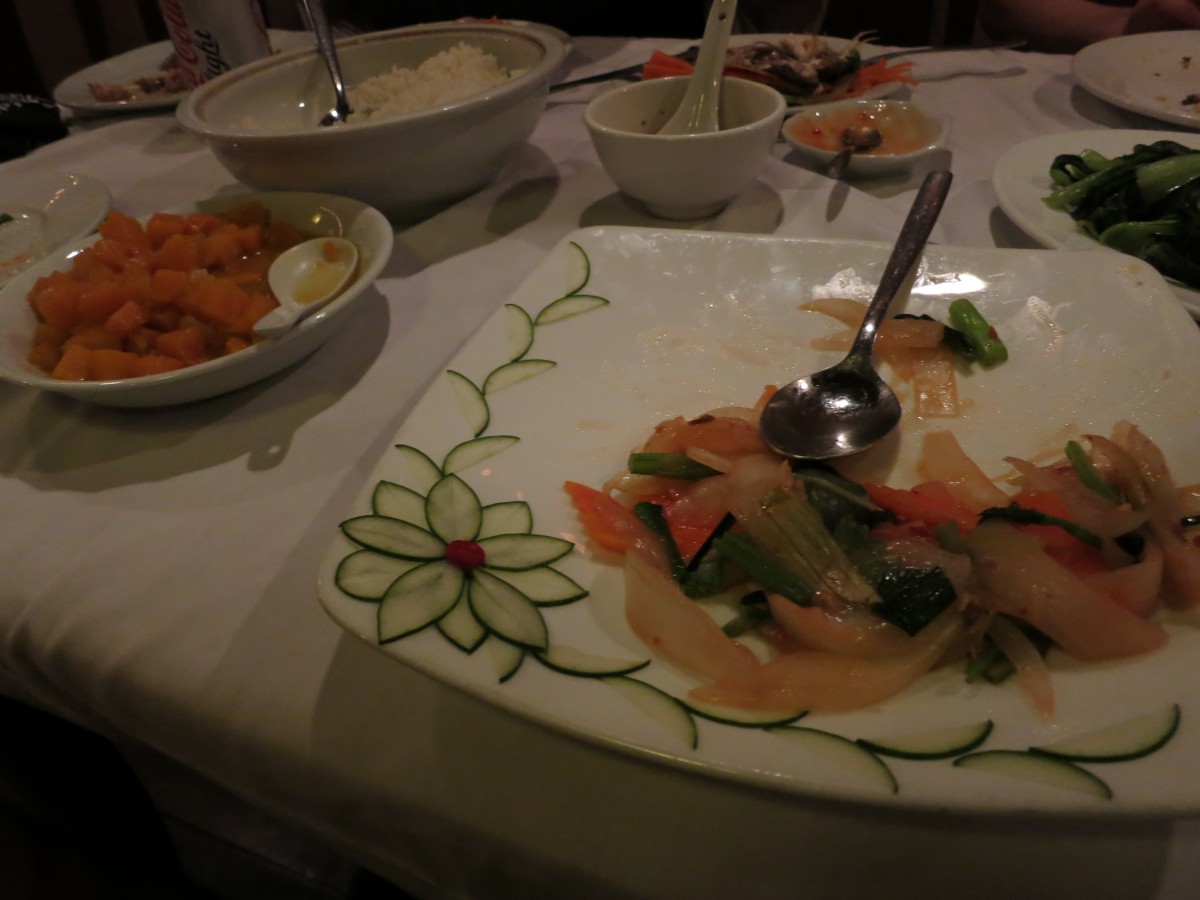 Pumpkin, onions and vegetables, morning glory. Check out that decoration of cucumbers.

After eating, we had some drinks and hung out. The rest of our travel companions were boring, and disappeared into their rooms. Some crew members invited us to join all of them in playing cards, and from there, it was lots of whiskey drinking, smoking and laughing. One of the crew, Huong, wrote the name of the card game down on paper as “Kings and Ass”.  John corrected him and wrote “Ace”. 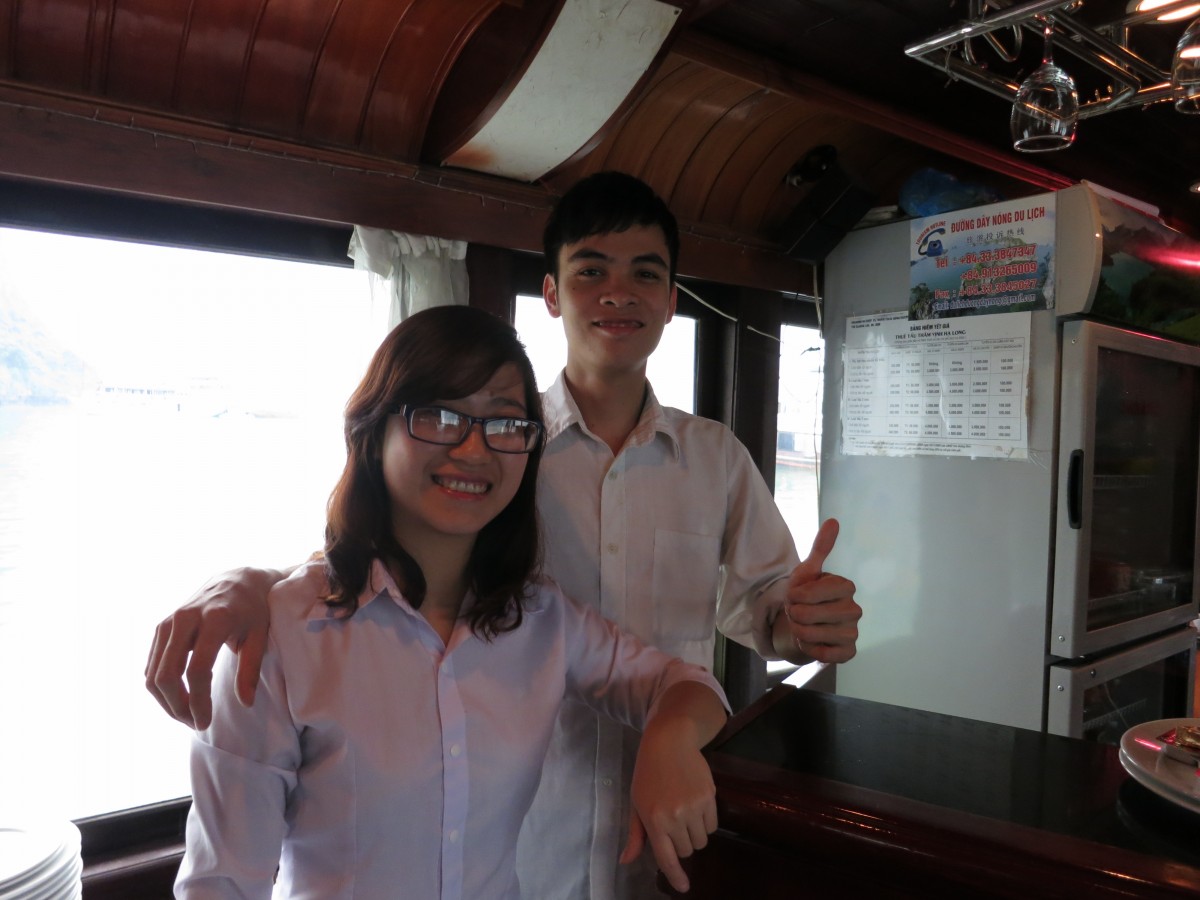 I forgot her name, but that is Huong on the right.

When Huong realized the error after translating it, I think at least 5 minutes passed before we stopped laughing. Amazing. We assured him that his name was better.

What is incredible about this area is that it is 15 km (about 10 miles) away from the port, where we embarked. Out here, there’s a vibrant fishing community that lives on boats and floating docks. There’s even a school for the kids. Many of the locals cruise around on boats selling things to tourists. 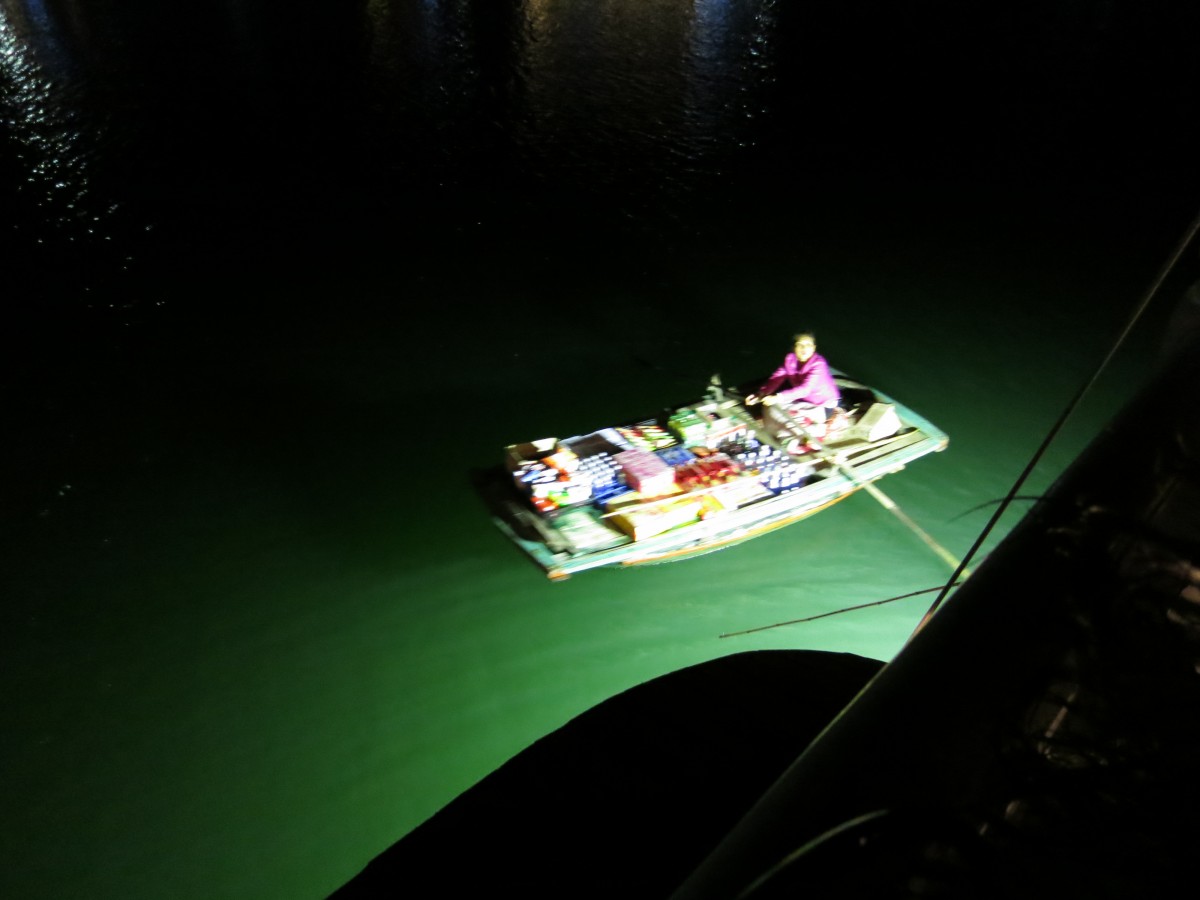 One of the locals cruising around the boats to make a sale. The light is coming off the boat because some people are squid fishing, unsuccessfully.

We also visited what Tun called “Amazing Cave”. And yes, it was amazing. The cave is carved out of the inside of one of the islands over millions of years by water. You see the expected stalactites and stalagmites. It was massive and impressive. 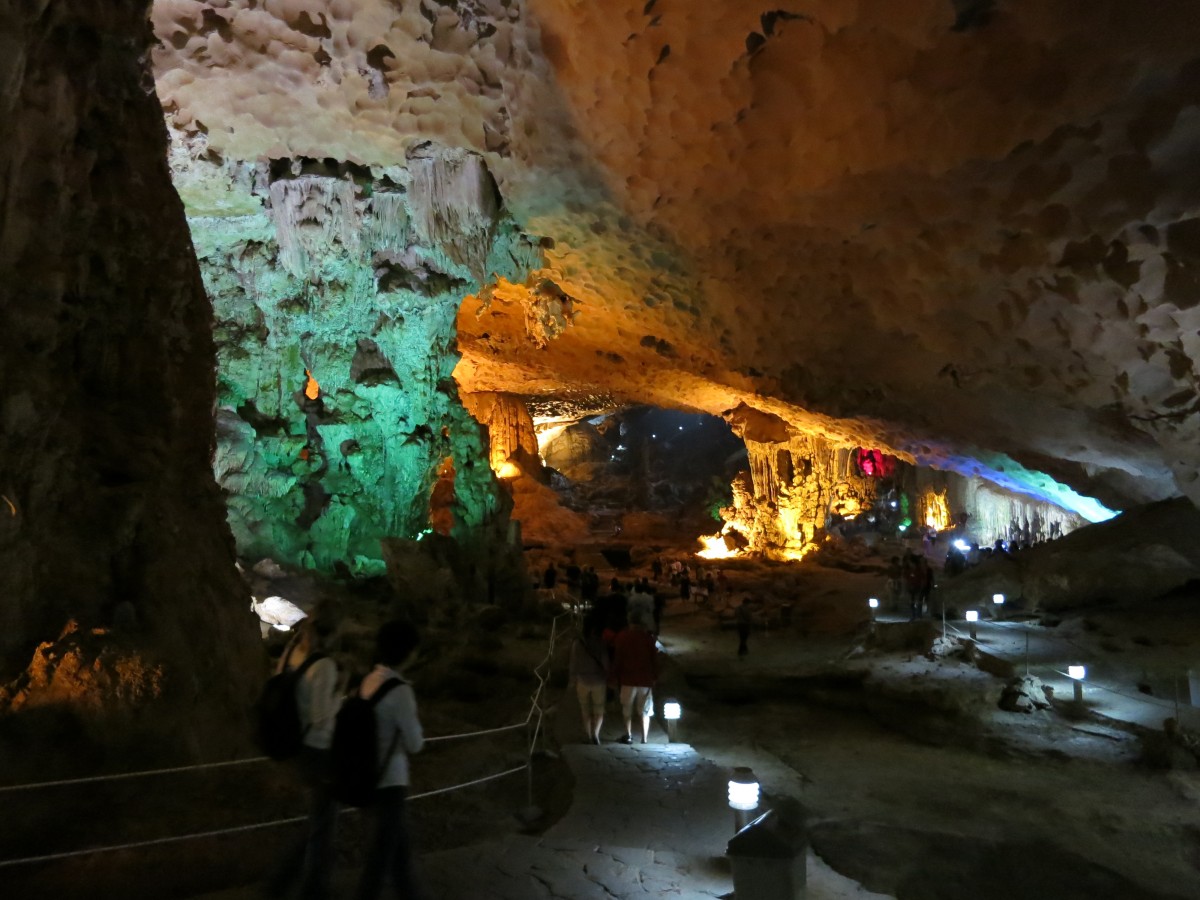 “Amazing Cave” – from the book, looking towards the front 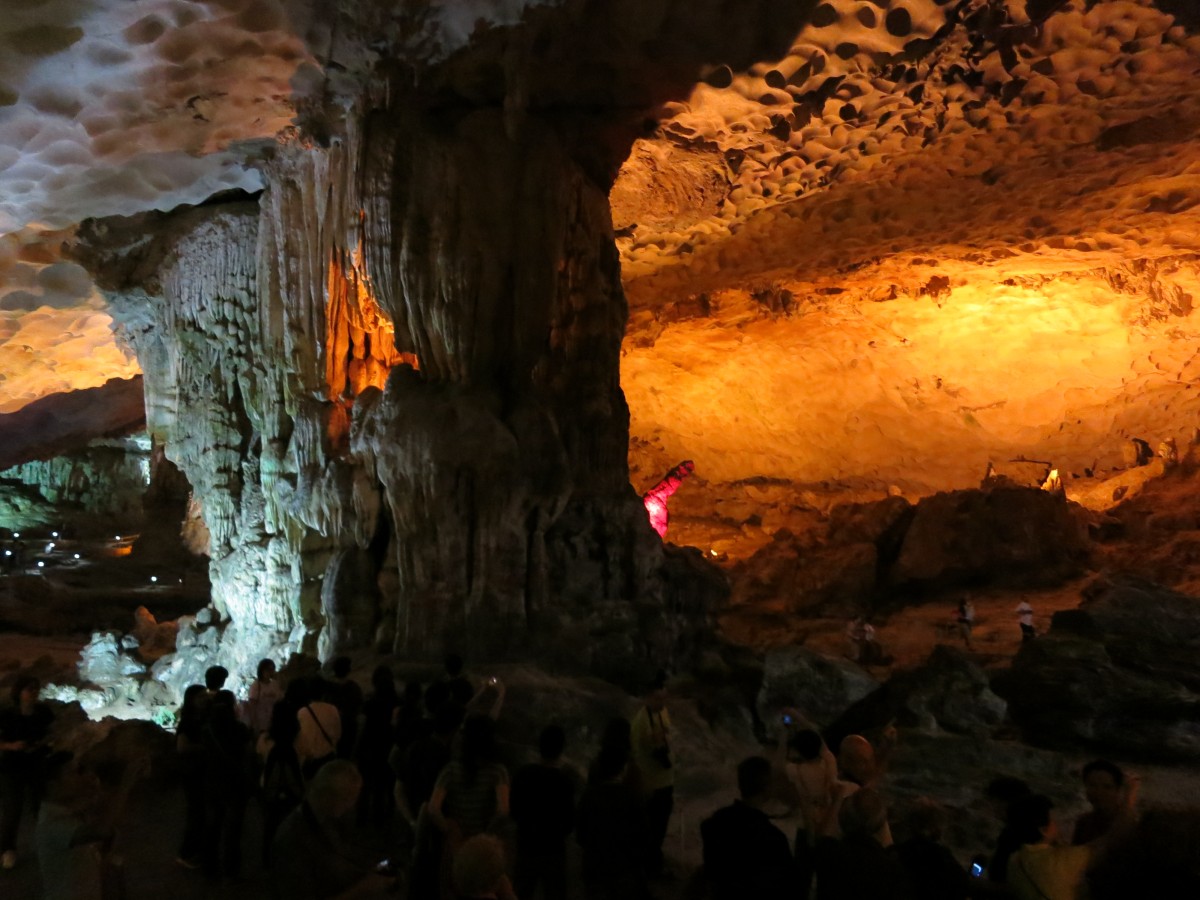 Here’s some pics of a cave we kayaked to below. 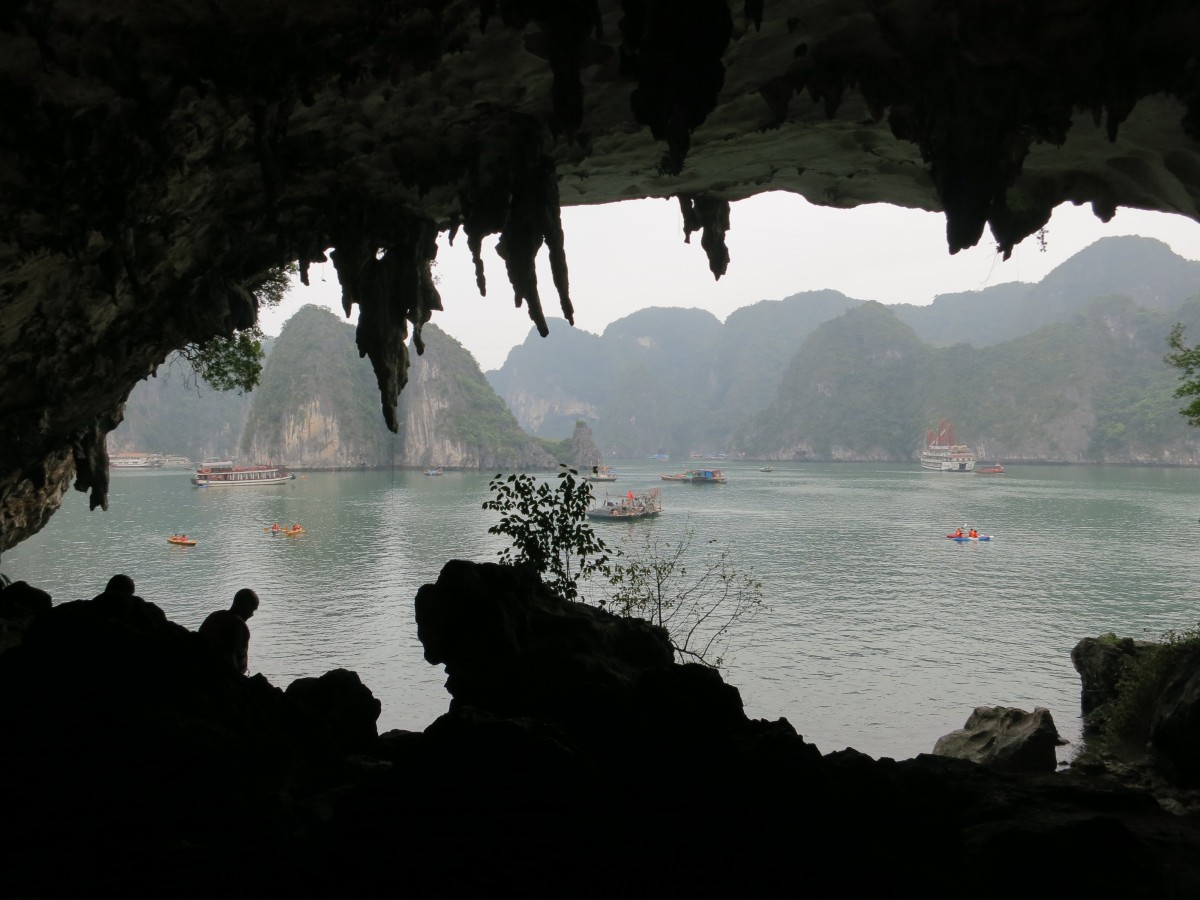 A cave we kayaked to, then climbed in 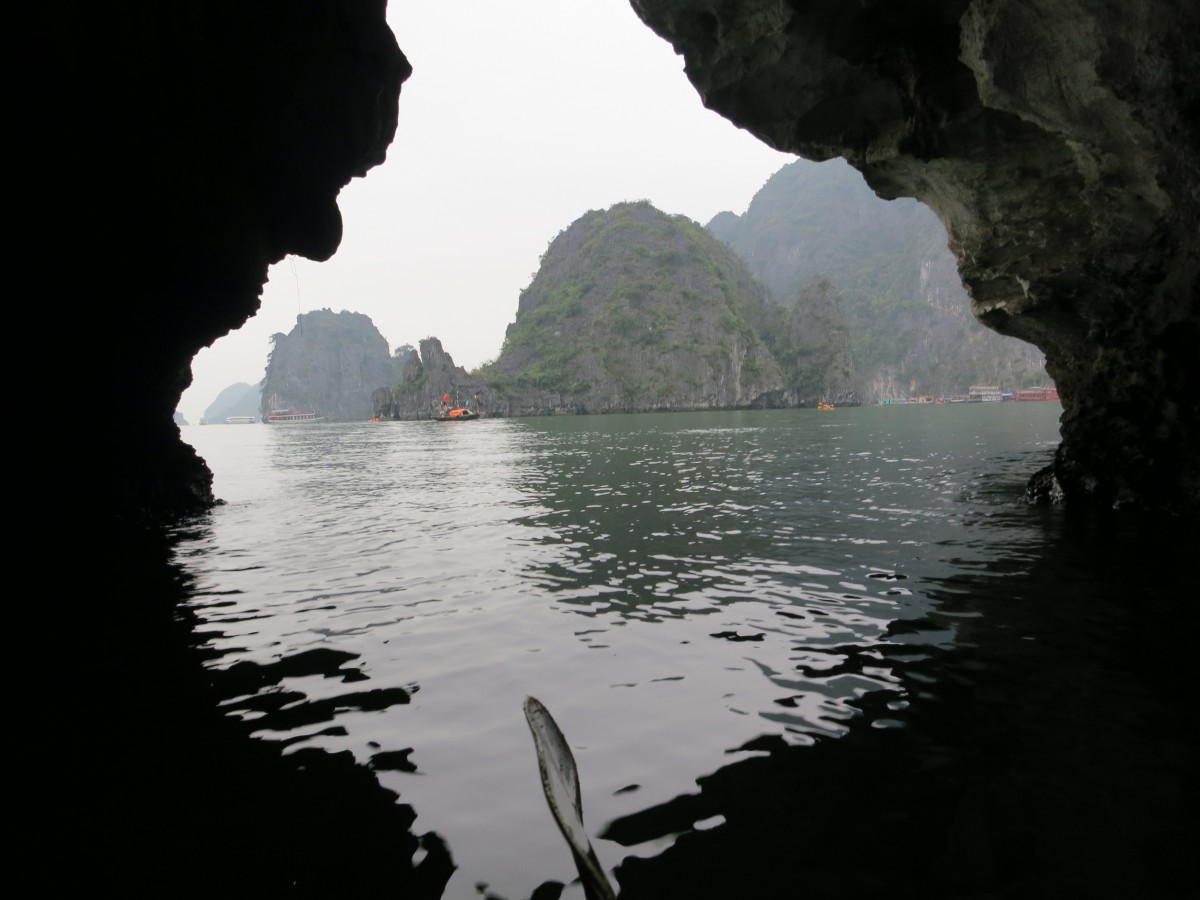 Sea cave, as seen from our two person kayak

We hiked about 500 steps to the top of this island: 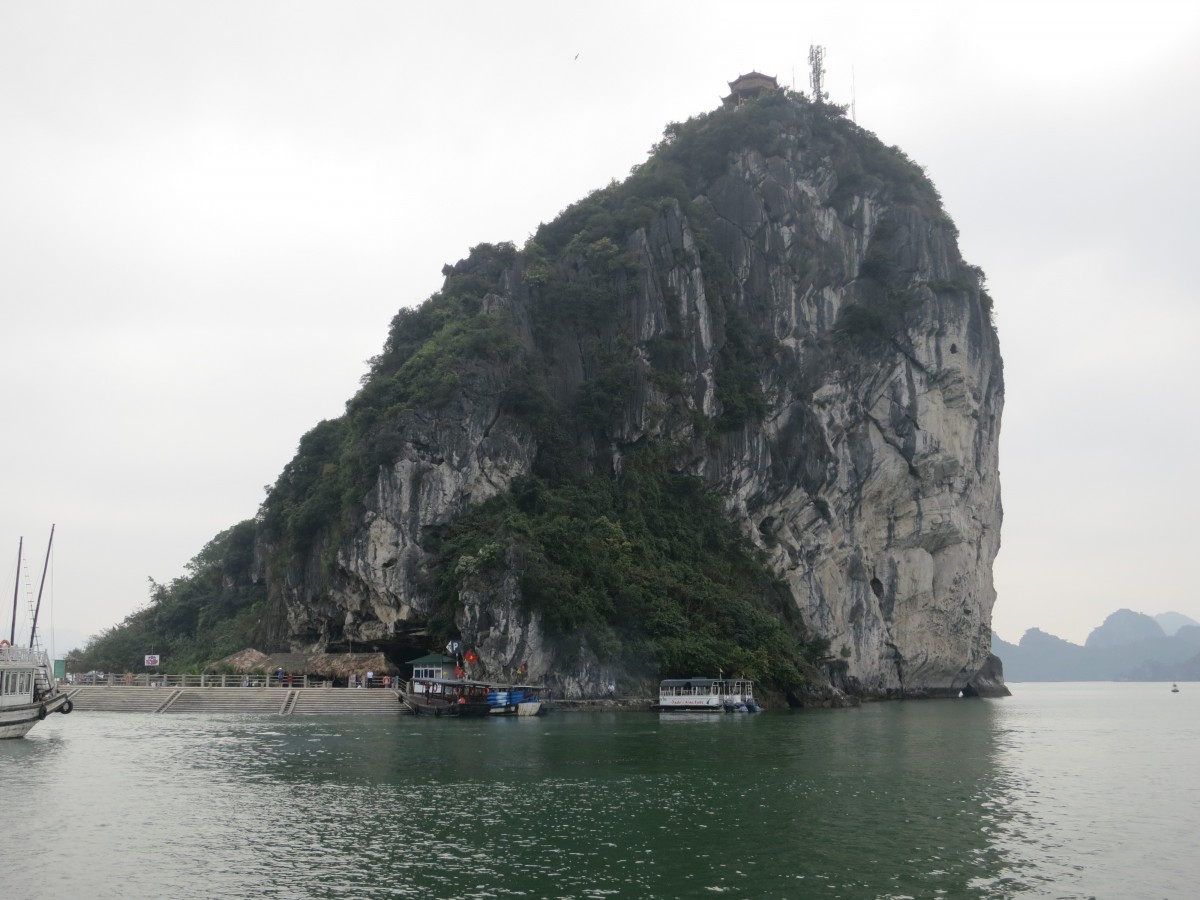 The island we climbed

View from the top: 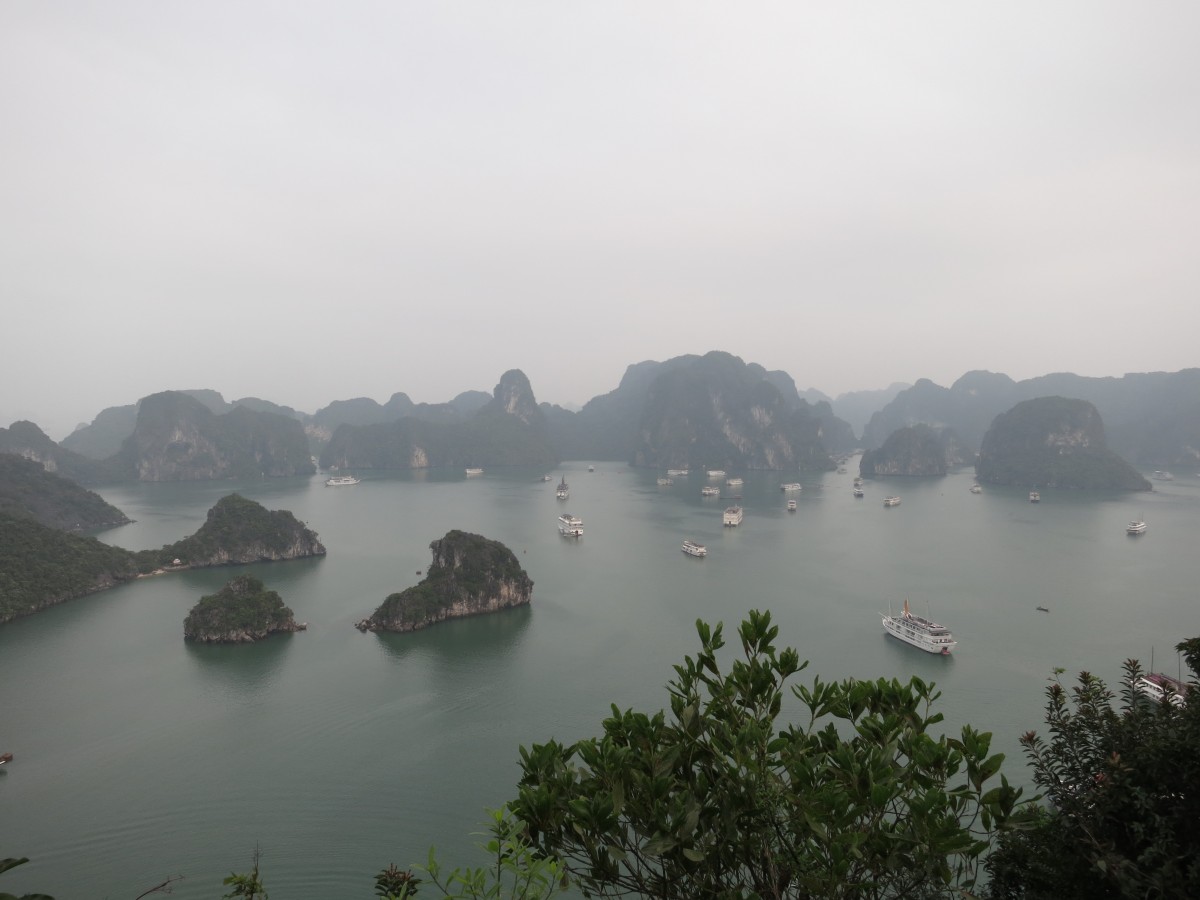 A part of Ha Long Bay as seen from the island we climbed to the top of.

And then there was this: 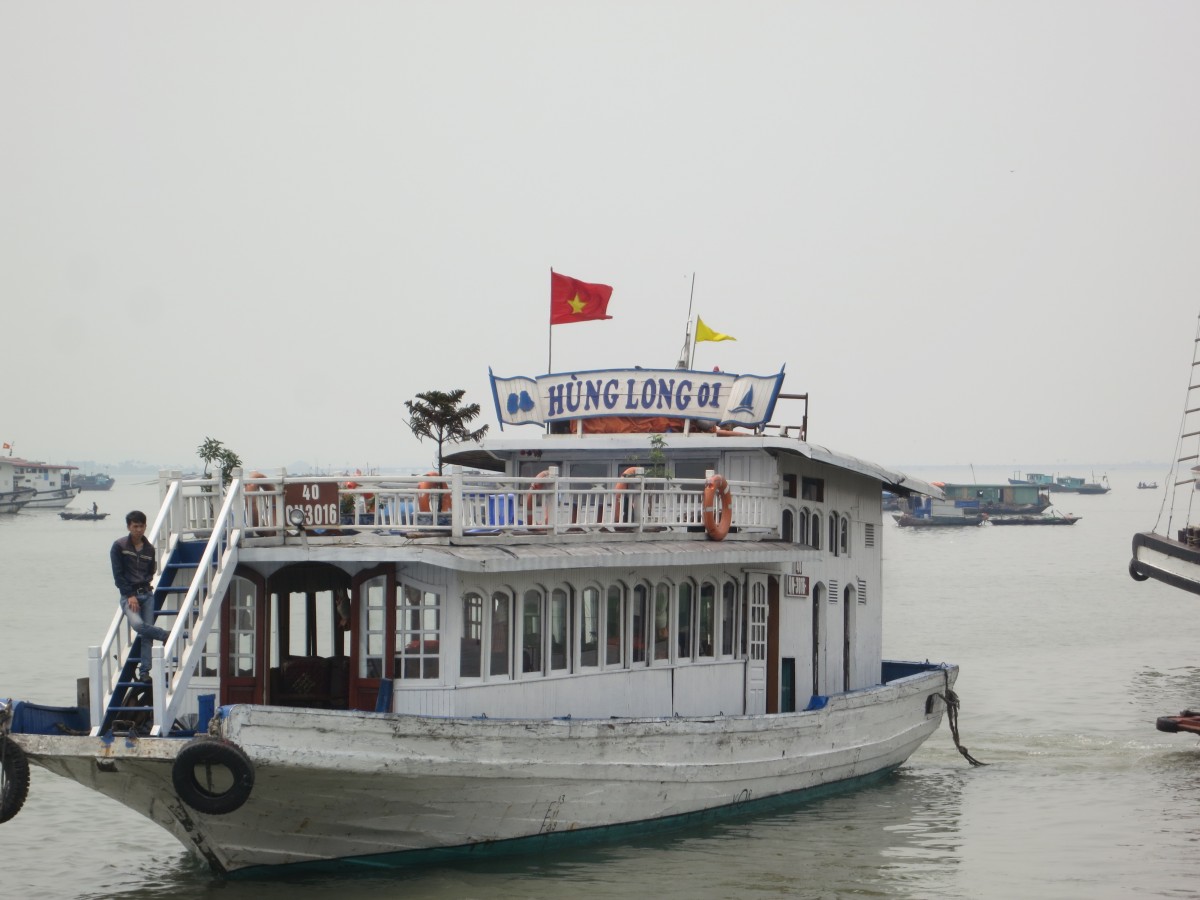 Hung Long in the bay